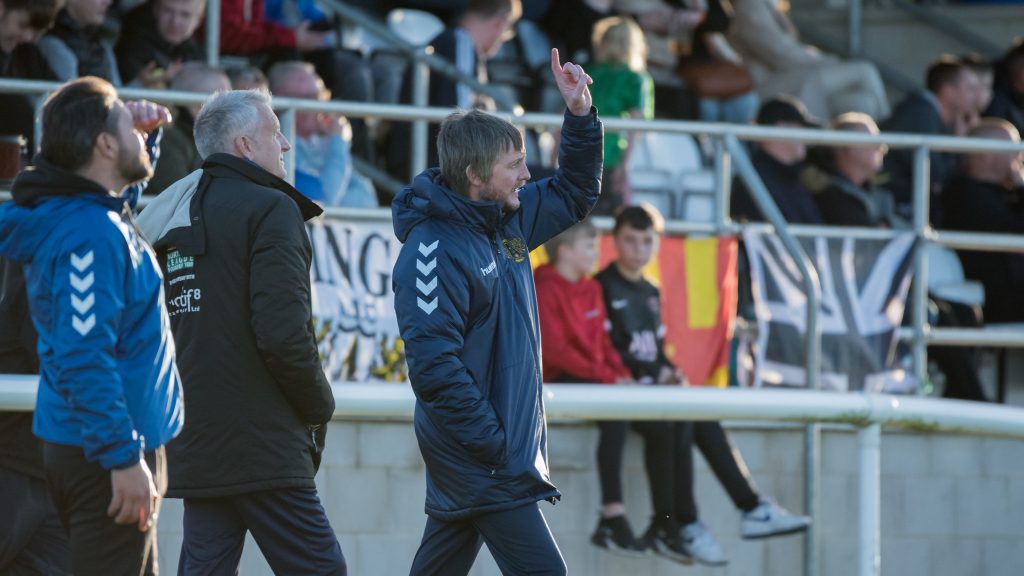 Ashington FC manager Ian Skinner pulled no punches when he gave his postmatch verdict following his sides 1-0 defeat against Heaton Stannington at Woodhorn Lane on Saturday.

“It was a tough watch at times today,” he said, “Firstly, I don’t think we (Ashington) played anywhere near the levels which we are capable of whilst for the second, we looked like a team who have had a tough week, with a long trip in the FA Cup followed by two home games in quick succession. I thought one of the positives was a good 15-minute spell in the first half where we moved the ball quick and caused them some problems. It was during this spell that we created our best chances including the penalty. Obviously we missed the penalty which was a big turning point in the game and Dean Briggs has hit the post from the rebound when really he should score. They’ve then broke and scored and for a team that had to this point sat deep, to give them a 1-0 lead, we knew it would be difficult afternoon and so it proved.”

He continued: “They’ve put 11 men in their half, and they’ve said ‘come and break us down’ – and today we couldn’t because we haven’t moved the ball quick enough; we haven’t passed it well enough, and we’ve turned the ball over too cheaply. So fair play to Heaton Stannington – they go away with three points in what was not a game for the purists. But how many times have we seen that this season? I keep saying to our lads that teams are going to come here and put a large number of players behind the ball, because if teams come here and open up and play football against us, we know we’ve got the quality to cause them lots and lots of problems. However today it just didn’t happen and it probably started to become ‘one of those games’ where you just think ‘it’s not going to be your day’ and ‘it’s not going to go in’ – whether the ball has dropped to the wrong person or it’s took a bobble or we’ve been leaning back or they’ve had 11 men in the box from corners and when it’s bounced, they’ve thrown their bodies on the line.”

He went on: “You could see what it meant to them today to hold onto their 1-0 lead, and we have to accept that today we haven’t quite done enough to break them down”. It will be nice to have a week off in terms of fixtures and for us to rest both mentally and physically following a tough week. We will however be back out on the training pitch twice this week to prepare for next Saturdays trip to Thornaby, where we will look to get back to winning ways in what will be another difficult game.

Skinner thanked the supporters: “We appreciate the fans,” he added, “They have again turned out in their numbers – and long may that continue.”

Meanwhile the boss will await fitness reports from several of his players ahead of Saturday’s trip to face Thornaby (October 29).