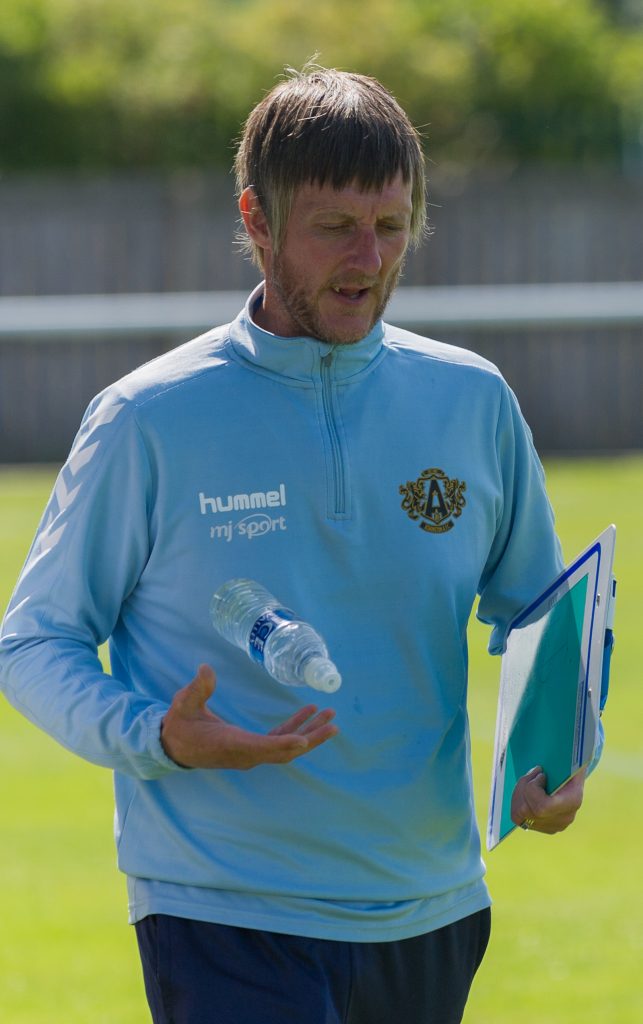 Manager Ian Skinner emerged from a noisy Ashington dressing room on Tuesday night following the 2-1 win over Sunderland RCA and revealed: “These lads don’t know when they are beat!”

The boss was referring to his sides late, late show against the Wearsiders in front of a crowd of 427 at Woodhorn Lane. Mark Davison had headed RCA into an early lead before substitute and skipper Ben Harmison scored twice in the closing stages to turn the game around and preserve Ashington’s 100 per cent record after five matches in the first division of the Ebac Northern League.

Skinner said: “Obviously I’m delighted that we have won the game but to be honest, even if we hadn’t managed to claw it (the game) back late, I don’t think my thoughts would have changed. I thought we played as well as we have done all season and I was delighted with the performance. The only negative was that I was really disappointed with the goal we conceded in terms of we could have stopped the cross and then we’ve allowed a free header at the back post. But then again, with this team of ours, you never feel too concerned. I thought we dominated the ball across the 90 minutes; created numerous chances and it will be interesting when I receive some of the stats back from the footage. RCA came and played a 5-4-1 formation which we are going to experience a lot this season. Obviously they had the added advantage of going 1-0 up so that makes them want to defend that little bit more but I just felt we created a number of chances in the first half and their ‘keeper (Keaton Marrs) has made some good saves. Other than the goal which they scored, they (RCA) haven’t really had another opportunity that I can remember of any great note.”

Skinner explained the half time team talk: “We went in 1-0 down and to be honest, I was full of praise for the players because of the way we played and the way we moved the ball. We just talked about a couple of little tweaks in terms of how we could just maybes open the space between their two units a little bit more so we could exploit it. Funnily enough we also mentioned about if we have to win the game late, then so be it. We just had to be patient and keep moving the ball and the deeper they got (RCA), the harder it is for them to get out as the game wears on. The more they had to move and slide and try to protect the goal becomes more difficult and we said we may need to wear them down and may need a bit of clever play or individual brilliance.”

He continued: “Second half we’ve had some very good chances. I was right behind the effort from Robbie Dale which was going into the top corner and their ‘keeper has made a brilliant save. He’s then made a couple of good stops and they threw their bodies on the line and just tried to defend manfully and hang on for a 1-0 lead. You get to the point where there are 15 minutes to go and think ‘it is going to be one of those days’ because we dragged a couple of efforts wide – but these lads don’t know when they are beat and that’s frightening.”

Skinner explained what was to be a game changing decision when he threw Ben Harmison into the fray just past the half way stage in the second period: “We just thought we are nursing striker Lee Mason a little bit at the moment and I thought it was an ideal opportunity to bring Ben on. It was a toss up really between him going up top or slotting him in at the back and sending Robbie (Dale) up there – but I just felt the way Robbie had played and the way the game was going that he was comfortable at the back. He was carrying the ball out of defence really well and I thought with fresh legs that Ben would be that bit stronger and it just gives them (RCA) something else to worry about because they would be concerned due to his height. Fair play to Ben. Before he scored, he probably had a really good chance on his left foot which he put wide of the post and knowing him as I do, he’ll be disappointed with that. But it was a great little deft touch by him for the equaliser.”

He added: “Ben was then clever because which ever side we were looking to exploit or attack down, he would pull off diagonally onto the opposite side so it gave us that option to cross the ball in. We brought Adam Johnson on to play off the back of Ben who is going to run players under the ball and if he misses it, he’ll take defenders with him and if the ball drops, one of our players has got a chance to be a hero. But to be fair, the ball that was stood up for him by Robbie (Dale) was excellent and as soon as I saw Ben rise, I thought ‘this is in.’ People will look at that piece of skill from Robbie (Dale) and ask me ‘why are you playing him in defence?’ with the way he marauded down that left wing which he has done for years. He’s gone one way then the other, dropped his shoulder, stood the ball up and Ben has got on the end of it and it was nothing short of what we deserved.”

He went on: “I was delighted with the performance and the result and full credit to the lads because it was important that we won. It was a game where we considered making one of two changes to try and freshen things up a little bit but after Saturday’s performance everybody reported fit and I just thought that when you win 5-0 at home to tell someone you are going to give them a little rest would be harsh. The bench is strong; the squad is strong and we are going to try and attack everything on all fronts starting on Saturday (August 20) as we turn our attentions to the Emirates FA Cup and an away clash against Tow Law. We have a two week break from the league and the FA Cup is an opportunity to progress in that competition. We’ll train on Thursday to prepare for the clash and we’ll see what Saturday brings – but it will not be an easy game.”

For the trip to the Ironworks ground, Lewis Suddick, Thomas Kalthoeber and Kyle Hayes are all ruled out but Skinner is hoping that Luke Salmon and Jordan Lashley will return to the squad.