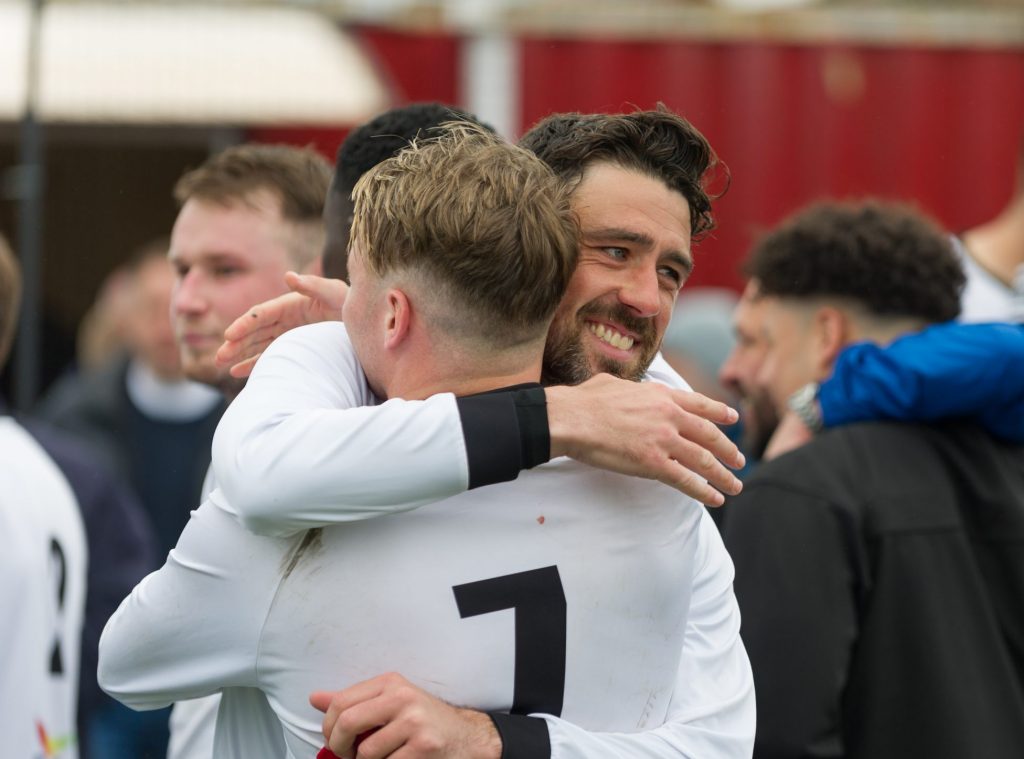 Winning trophies is nothing new to Paul Robinson. After all, the stylish midfielder has his own collection of medals and treasured memories.

In an outstanding spell with Ebac Northern League outfit Whitley Bay he not only won the FA Vase with them once or twice at Wembley Stadium but on three occasions – and in consecutive years too. And just to put the icing on the cake, ‘Robbo’ – as he is nicknamed – also scored under the arch in the Seahorses 6-1 Vase final triumph in 2010 over Wroxham.

On Bank Holiday Monday, Robinson was again a scorer and a winner as he put Ashington on the path to victory with a goal inside the first minute of their ENL Division One Cup final against Newcastle Benfield. Ten minutes into the second half, he notched a second with a sumptuous right footer from the edge of the penalty area. His side ran out comfortable victors by a 4-1 margin.

It was Ashington’s first piece of silverware for nine years. The last occasion the Colliers picked up a trophy was after their 3-0 Northumberland Senior Cup victory over Whitley Bay at St James’ Park in 2013. Ironically ‘Robbo’ witnessed the game at close quarters. He was captain of the coast outfit and admitted that Ashington won the game comfortably.

Based in Seaton Delaval, Robinson has worn the colours of Ashington for two and a half years and was clearly delighted to help them arrest a barren run: “Ashington are a great club with great people and have a great set of lads,” he said, “I love playing for them and to win the cup on Monday was a nice way to finish the season. I’m over the moon for Ian Skinner – who is brilliant man as well as being a brilliant manager – and for all the workers behind the scenes. People don’t necessarily see the amount of work which goes on in the background so winning the cup was brilliant for them as well.”

North Shields-born Robinson – a football coach for Pro direct academy – set the ball rolling too: “The pitch was nice because it had a bit of zip on it so we could play and it was just one of those games where a lot of things I tried came off,” he said, “I kept the ball well and obviously scoring after 32 seconds helps everyone’s confidence.”

The 37 year old – 38 at the end of this month – had to find top gear very quickly: “The ball broke to Lewis (Suddick) and I put my head down and tried to run as fast as I could just to get in the box,” he added, “Lewis then played it across and like I have said about the zip on the pitch, there wasn’t any bobble and it was just a case of getting a good clean connection and putting the ball in the net.”

Robinson – happy with his own performance on the day – continued: “The second goal was nice and was another excellent pass from Ben Sampson. Sometimes Ben can fire the ball into me but he’s played it in nice and soft and all the weight was off (the ball) so again I just had to get a good connection, wrap my foot around it and I thought it was going in from the minute it left my foot. It was a great feeling and again, things like that have come off for me today so I’m really happy.” Robinson –- heaped praise on his team mates: “All the lads were brilliant today,” he said, “We played some good football and managed the game when we had too. We had also worked on a game plan with the manager earlier in the week. We had two top sessions and things turned out very well.”