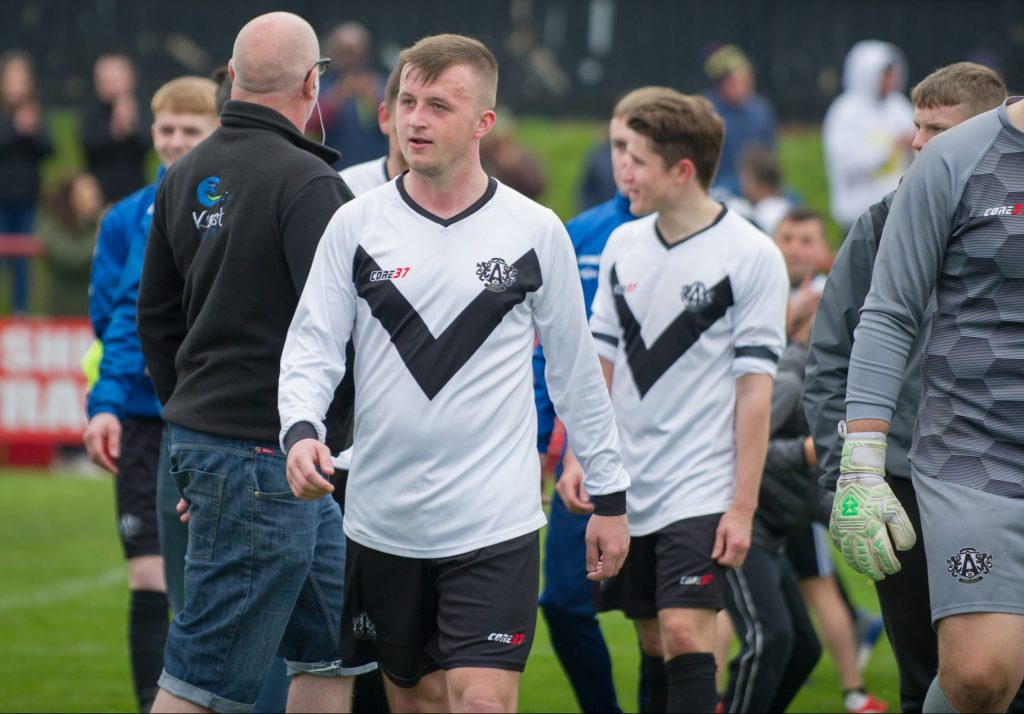 Ashington FC defender Thomas Kalthoeber said he was ‘blown away’ when he found out an hour before kick off that he was in the Colliers starting line up for their Ebac Northern League Division One Cup final showdown against Newcastle Benfield on Bank Holiday Monday.

The Wansbeck side convincingly won the clash 4-1 – but Kalthoeber admitted to being taken aback: “I wasn’t expecting to be in the team,” he said afterwards, “I thought I was going to make the bench – so it was a nice surprise.”

Not once but twice, Kalthoeber’s season appeared to be over after he picked up serious injuries but the Newcastle-born defender never gave up hope of the Wansbeck outfit progressing to the final.

In matches barely a month apart against Thornaby, the 20 year old was in agony with separate injuries. In the DOC clash, Kalthoeber made a game changing tackle towards the end to prevent an equaliser – but suffered a hamstring tear.

He made strenuous efforts to recover – so much so that he played against the Teessiders in the league match at The dwmedia Stadium on April 9 – only to be forced off with a shoulder problem.

Again it was thought his campaign would be curtailed. However, less than a week before the grand final of the DOC, Kalthoeber – who is based in Longbenton – returned to training: “I felt fine although I could still feel my shoulder,” he said, “I was putting ice on it and I was desperate to be involved in the final.”

Kalthoeber – who wore the number five shirt against Benfield – continued: “I was a bit shaky for the first five to ten minutes but as soon as I got a touch on the ball I felt comfortable – and I was really confident that we would go on and win. We made the perfect start by scoring because it put them (Benfield) under pressure straight away and I thought ‘this is it.’ To win was just amazing and I’m buzzing. To be honest I wish the campaign was starting now – so I’ll be raring to go pre season.” It was triple success for Kalthoeber over the weekend too. “It’s been good,” he said, “I’ve lifted three trophies in two days. I won the league and league cup with Newcastle Eastend 23’s and then the DOC with Ashington today.”