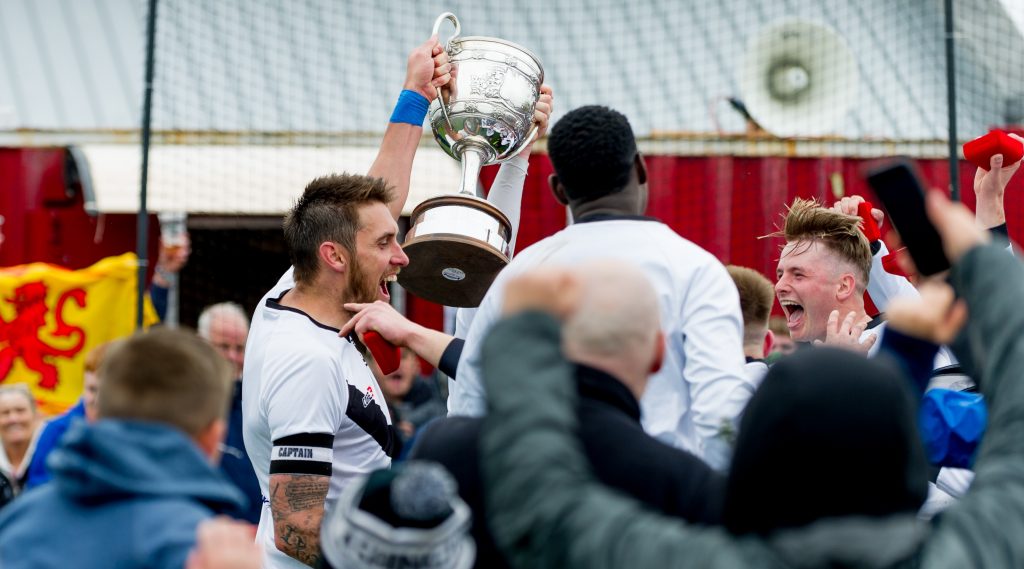 Ashington FC won their first piece of silverware for nine years on Bank Holiday Monday when they clinched the Ebac Northern League’s Division One Cup after outclassing Newcastle Benfield at the Daren Persson Stadium in North Shields.

And afterwards delighted skipper Ben Harmison – who was presented with the cup by ENL president George Courtney – said the 4-1 victory should be a stepping stone towards future success.

Harmison said: “It was a massive win – and you can see what it means to all the lads and especially the fans. Their support was absolutely top notch and hopefully we’ve given them something to be happy and proud about. There have been a couple of coach loads of fans come through as well as those who have made the trip by other means of transport and it’s brilliant for them. It also shows how together the town is – and the lads and staff are just pleased we can put a smile on their faces.”

He continued: “I also thought the win was thoroughly merited because we played really well today and over the course of the season we have deserved some kind of silverware. Winning the cup is also for all the effort from the staff – manager Ian Skinner, Lee Anderson, Neil Cooper and Mark Ramsden as well as chairman Brian Shotton and all the volunteers for what they do behind the scenes.”

He went on: “I definitely think we can go on to better things next season. Winning today gives us that belief – this was the first trophy for the club for nine years and teams like Ashington should be associated with silverware more often. The togetherness we have got, this should be a stepping stone for us to push on next year and try to win more – like promotion and to have an extended run in the FA Vase and all of the other cups.”

Reflecting on the game – played in front of a bumper crowd of 805 – Harmison said: “Everything went according to plan. We knew how they (Benfield) were going to set up and we wanted to hit them in the wide areas – which we did. We attacked with pace and energy and ‘Robbo’ – Paul Robinson – arrived at the back post and put the ball away for our first goal and then we got a second. We probably took our foot off the gas a little bit and didn’t show enough energy for 10-15 minutes but then second half we kept the ball and dominated and I think we could have scored five or six.” Harmison added: “Everyone is happy and that comes from the hard work on and off the pitch from the lads in the club. It’s great to get a trophy – and it was about time we brought nine years without silverware to an end.”