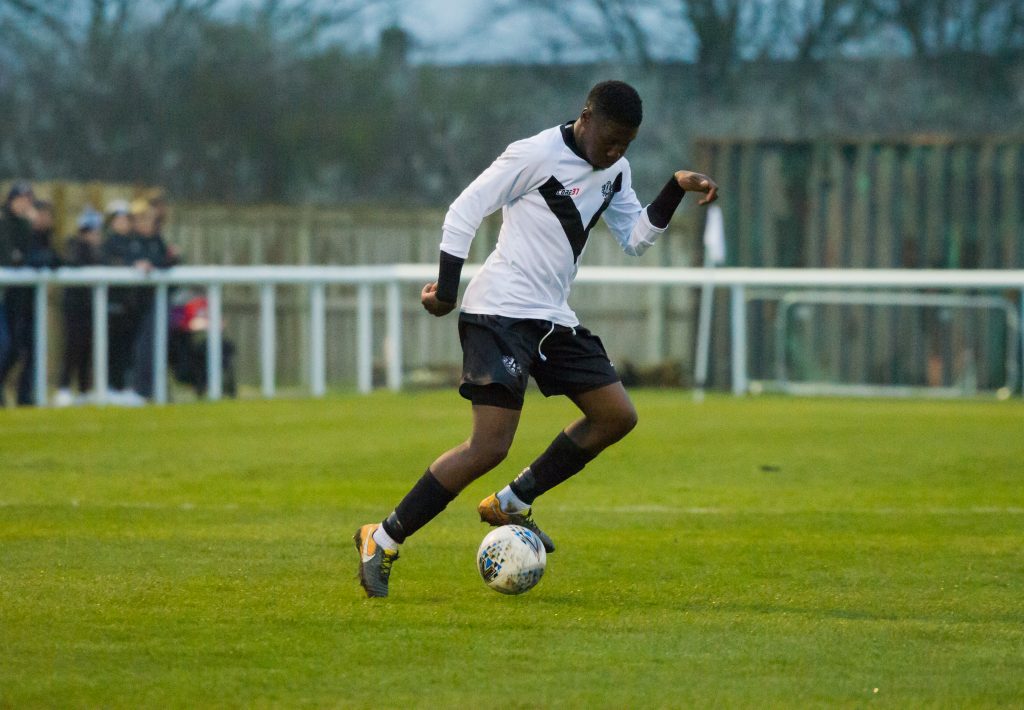 Ashington FC defender Yannick Aziakonou said he was ‘absolutely buzzing’ after helping the Colliers to reach the final of the Ebac Northern League Division One Cup following a pulsating 4-3 win over Consett at Woodhorn Lane on Tuesday night.

The 22 year old was heavily involved at both ends of the pitch midway through the first half. His searching pass from right to left found the overlapping Jordan Summerly down the flank who scored then minutes later, Aziakonou was at the heart of the action, clearing the ball off the line to deny Carl Lawson what would have been a second equaliser for the Steelmen.

He said afterwards: “I thought I had a mixed game. I did some really good things but then I was disappointed with other aspects where I could have done a lot better. For the one I set up for the goal, I saw the space behind and had to make sure I didn’t hit the pass too hard. I was happy I executed it well and it’s just gone over the full back’s head and Jordan (Summerly) has done really well to finish it off. For the goal-line clearance, it’s all about instincts really. Playing in defence is a number one priority for me about whether I can protect the goal; can I protect that space to cover my ‘keeper – and fortunately I was on hand to deal with it tonight.”

As for reaching the final, Aziakonou, a football coach who is based in Fenham, said: “I’m absolutely buzzing. All the time I’ve known about Ashington it has been a case where they have struggled in the league – but it’s been a wonderful season and there’s no better club I’d rather be with. The staff here is tremendous with the amount of effort they put in such as analysing the opposition and that level of detail is phenomenal.”

Aziakonou paid tribute to the Ashington supporters: “Obviously they have played their part tonight,” he added, “They were massive for us and I don’t think they realise how big a difference they make when you hear the drums and the chants – it’s just brilliant. After we conceded the equaliser at 3-3, they cheered us on straight away – and we scored what proved to be the winner within ten seconds of kicking off so the fans showed their worth. Again at 3-3, I had mixed emotions. Were we going to throw it away; was it going to go to penalties and did we really have an extra man but it was a magnificent feeling when Dean (Briggs) put us 4-3 up – and I’m thrilled to bits for him. He’s come back from Dubai , done well for the team by helping us out massively and he really showed up tonight.”

Ashington conclude their league programme on Saturday when they travel to face Consett and Aziakonou said: “I think bouncing back – which we do very well – has been the story of our season. I’ve been really happy and from my point of view, it’s a case of working hard and proving to the manager and the staff what I can do and what I can add to the team. I got myself a chance just before Christmas where I played nine games in a row and thought I was playing really well by turning in some good performances and feeling sharp. I was rested for the Newcastle Benfield game then I’ve been in and out of the side – but I’m happy to play my part and do my best.”