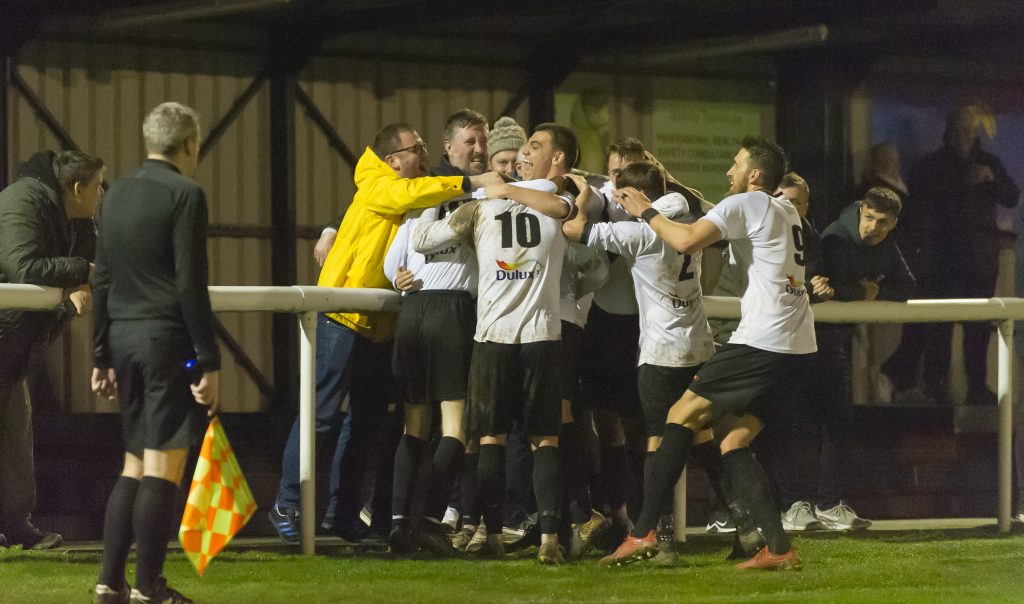 Ashington FC manager Ian Skinner – understandably euphoric after his outfit had won a titanic contest to go through to the final of the Ebac Northern League Division One Cup after a 4-3 margin over Consett at The dwmedia Stadium on Tuesday night – has expressed his overall delight for the supporters and behind the scenes volunteers connected with the Woodhorn Lane outfit.

Dean Briggs scored a brace for the Colliers whose other goals came from skipper Ben Harmison and Jordan Summerly. Carl Lawson, Scott Heslop and Colin Larkin (penalty) were on target for Consett who played the final half hour with ten men after Calvin Smith had been red carded.

However the Colliers will have to wait patiently for the outcome of the other semi final between Sunderland Ryhope CW v Newcastle Benfield – due to be staged on Saturday week (April 23) – before knowing who they will face in the final.

Skinner said: “As well as being delighted for the players, I am also delighted for the supporters. They have come out in their numbers all season and backed the team with fantastic vocal support throughout and even in recent weeks when we haven’t quite played to the levels we had earlier in the season, they have stuck with us and hopefully they can enjoy a day out at the final.”

He continued: “In addition I am also delighted for the chairman (Brian Shotton) who invests massive amounts of his time carrying out all sorts of duties above and beyond his role plus all the volunteers behind the scenes who keep the club operational on a daily basis. This is as much for them and their hard work as it is for the players and supporters. However we will all only enjoy our day if we can go on and lift the cup – and that is what the aim will be.”