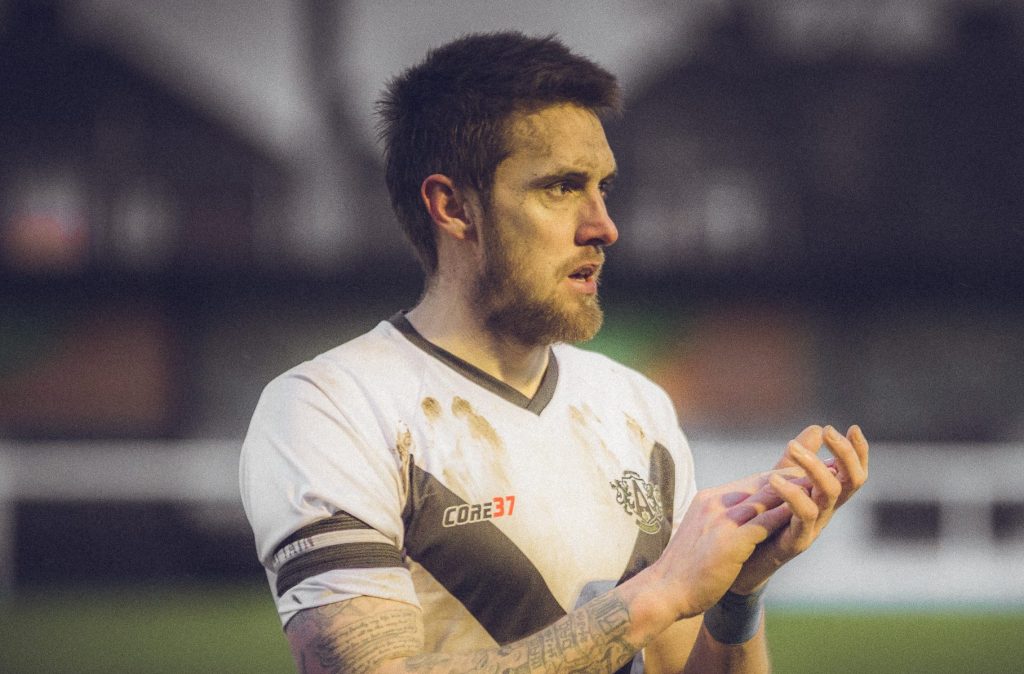 For the former striker revealed afterwards that it is the first time in his career that he has scored twice in a match – since switching to the role as a defender!

“I was just happy to get into the box,” he said, “But as a centre half, I had never scored twice in a game before. For the first goal, I just stayed up and with the turnover, we won the ball back so it was a bit of a gamble (to stay up). It was a great ball in by Liam Doyle which held up in the wind and once I had a run on the West Allotment back line, I knew I would beat them and it was good to see the ball go in.”

He continued: “I didn’t know much about the second one (goal) to be fair. It was a bit of a ricochet in the box, I just stuck a leg out and the ball went into the net.”

Harmison was delighted with the way his side not only adapted to the awful conditions – but also served up some scintillating soccer: “The team are playing brilliantly,” he added, “I thought we played some unbelievable football especially in the first half against the wind and driving rain but after going into a 3-1 lead we switched off and conceded a second straight away. We were disappointed that the lead wasn’t 3-0 at half time because the goals we conceded were poor – but when you looked at the conditions at kick off, for us to come in 3-2 up after playing against the elements was still an outstanding team effort.”

He went on: “At half time we said we had played some good football yet we were disappointed. Even reflecting on the first goal, for a spell of about ten minutes we were giving away silly free kicks around the box against the wind which we couldn’t afford to do. We didn’t defend the header from the first ball in which hit our ‘keeper Karl Dryden and we didn’t gamble to get the rebound.”

The 36 year old was pleased as Ashington ‘managed’ the game after the break: “We could have had more,” he said, “Dean (Briggs) has hit the ‘keeper a few times from great positions but in the end we just managed the game. We didn’t push on to score; we didn’t have too as we were winning 4-2 and we just kept the ball – and it was good to get the win.” Harmison admitted that the conditions were ‘horrible’ but added: “The rain helped because it livened the pitch up so we could move the ball quickly,” he said, “If it had been dry and windy it would have been a nightmare. Against that wind was horrible but the lads showed great character.”