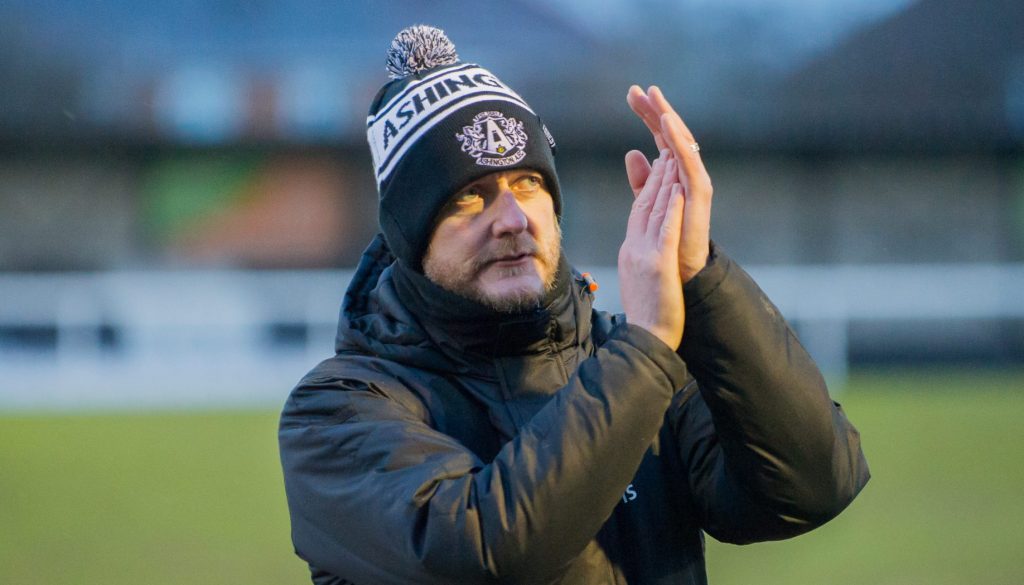 Ashington FC manager Ian Skinner admitted that it was nice to get back to winning ways following his sides 4-2 success over West Allotment Celtic on Saturday: “After back to back defeats then losing the game at Northallerton due to the weather conditions, it was nice to get back out there and play – albeit in very tough conditions firstly with the wind then the driving rain throughout the first half. We had both elements in our faces so I can only give credit to the players for the first half performance. We are a team who like to get the ball down and play anyway but obviously against the driving rain and the gale force wind it forced us to really play. However, the pleasing thing was some of the things we have asked the players to do in terms of shortening our game even more and play five and ten yard passes, they did – and to be fair in spells in the half we played some fantastic football. The second goal we scored was great where we have worked it from left to right and when the ball has come in, Craig Spooner has got across the front post and put it (the ball) in at the far post. It’s bits and pieces that we work on so again credit to them (the players) because since Christmas our training levels have been high; our quality has been good and although we lost two games against Sunderland Ryhope CW and North Shields recently, nobody could have complained if we have won both of those fixtures. We talked about how we had lost two games – although performances were good – and how we needed to keep at that level.”

He continued: “First half today we went a goal behind – after a bit of an untidy play but it was a typical ‘difficult weather’ goal if I’m honest. However, we showed fantastic character to come back and equalise immediately. It was a great delivery from Liam Doyle and Ben Harmison – in the opposition’s box – has planted a superb header into the net and it is nice for him to get into those areas. The third goal was a good move but a bit of a scrappy finish after Ben Harmison’s presence caused problems in the box.”

Skinner had mixed feelings at the interval: “I was really disappointed with the second goal we conceded – it was poor,” he added, “Matthew Hayton went straight through the middle of the pitch and scored – but having said that if somebody had offered me a 3-2 lead at half time after having seen the conditions, I would have accepted it.”

He went on: “I thought we managed the second half really, really well. I think our ‘keeper Karl Dryden has made one save which you would expect him stop where he was a little bit wrong footed at the near post and he’s had to make sure. Other than that he’s almost been like a sweeper for us. We moved the ball really well – and again when we came out for the second half the pitch was really slippy underfoot. The players got the ball down and Craig Spooner has scored a fantastic goal to make it 4-2 which makes our task a little bit easier. Then I just thought we had a little spell where – and I’m always looking for the perfect performance – we just turned possession over a little bit cheaply and more than we should have but throughout the whole period I thought we were comfortable without being disrespectful to West Allotment Celtic. We probably could and should have scored more but I was really, really pleased and it was nice to get back to winning ways. Sometimes our group of players get questioned about playing in conditions like today because we’ve got a talented bunch – a technically good group – and I’ve heard people say ‘I’m not sure if they can roll their sleeves up and play in the mud’ – well they’ve shown today that that is not a problem!” He added: “We have had to leave players out of the squad today and that’s the part of the job that nobody likes. It’s always difficult to tell lads they are not in the squad let alone not play but that’s the competition we need because that keeps those who are in the squad and the team on their toes knowing that there is somebody waiting to take their place. You don’t expect them (who are not in the 16) to be happy but I told them ‘we are playing really well at the minute and you may have to be a little bit patient.’ We want everybody to stay because they are a fantastic group – I think I’ve already gone on record as saying this is the best group of players I have worked with in terms of the way they get on with each other and the way the mood is in the dressing room. We are a club who want to progress and go places and the players want to be part of that which is fantastic.”