They talk long and hard about the magic and romance of the FA Cup and on Saturday, Ashington again experienced a day which will be embedded in their history.

The Colliers caused a major cup upset – this time with a 2-1 win over Bradford Park Avenue – and what’s more, the Colliers enjoyed and fully deserved another slice of success.

The visitors who play three divisions higher in the National League North, the same as Blyth Spartans, languish near the basement of the table – but that was irrelevant to Ian Skinner’s side who gave it their all and went toe to toe with their opponents from West Yorkshire in what was a thrilling tie.

Ashington – who saw off Northern Premier League, Premier Division outfit Ashton United in the last round via a replay in Wansbeck in front of a crowd of 671 – even had the added satisfaction of boasting an attendance in excess of 700 with Woodhorn Lane rocking from the first whistle until the last.

Before kick off an impeccable minutes silence was observed by players, officials and supporters following the passing of Her Majesty Queen Elizabeth II.

When the game got under way, home supporters got a taste of what was to come in the fourth minute when Dan Maguire had an effort on target which cannoned off Reece Staunton on the six yards line.

Sixty seconds later when Ashington took the lead, it may have been courtesy of an own goal but nevertheless typified their high tempo start.

Andrew Cartwright picked out Dean Briggs with a superb cross field pass from right to left and after skipping past his man, the midfielder whipped over a cross into the danger zone which Staunton sliced past his own ‘keeper George Sykes-Kenworthy.

Ashington continued to go full throttle at their visitors and on the quarter hour after receiving from Briggs, Craig Spooner had Sykes-Kenworthy scampering across his line with a 25 yarder which went narrowly wide.

In the 18th minute, the visitors thought they had levelled through Jacob Blyth following a free-kick but the goal was disallowed for offside then Maguire found Lee Mason but a timely tackle by Staunton thwarted him.

Bradford had a lot of possession from the start of the second half and in the 53rd minute, a shot from Jamie Spencer was tipped around by home ‘keeper Karl Dryden.

But after digging deep and repelling the pressure, Mason had a great chance following a move which was initiated by Cartwright and also involved Maguire but drove his shot straight at the ‘keeper.

However midway through the period, Mason was cruelly denied by the woodwork after a piece of inspirational magic.

He latched onto a cross from Spooner and acrobatically volleyed a scissors kick with his right foot which rattled against the bar.

A minute later, Maguire played the ball across looking for Mason again but on this occasion, defender Mitch Lund made a great interception.

With a little over quarter of an hour remaining, Ashington withdrew Mason introducing Adam Johnson – and within three minutes and following a good move, the substitute saw his left foot effort deflected behind.

Briggs swung over a pinpoint cross from the resultant flag kick where skipper Ben Harmison towered above defenders to send a header into the net past Sykes-Kenworthy who was rooted to the spot.

The home fans erupted – but six minutes later, they were left to face an anxious finale after the visitors halved the deficit through Will Longbottom, the substitute heading just inside the upright after a cross from the left had been partially cleared at the near post.

Three minutes later, sub Eddie Church thought he had levelled the tie – but the assistant’s flag was raised for offside.

Then came the final whistle …… which sparked off jubilant scenes for the Wansbeck outfit.

On Saturday (September 24), Ashington return to league duty with a trip across to Cumbria where they face Penrith. 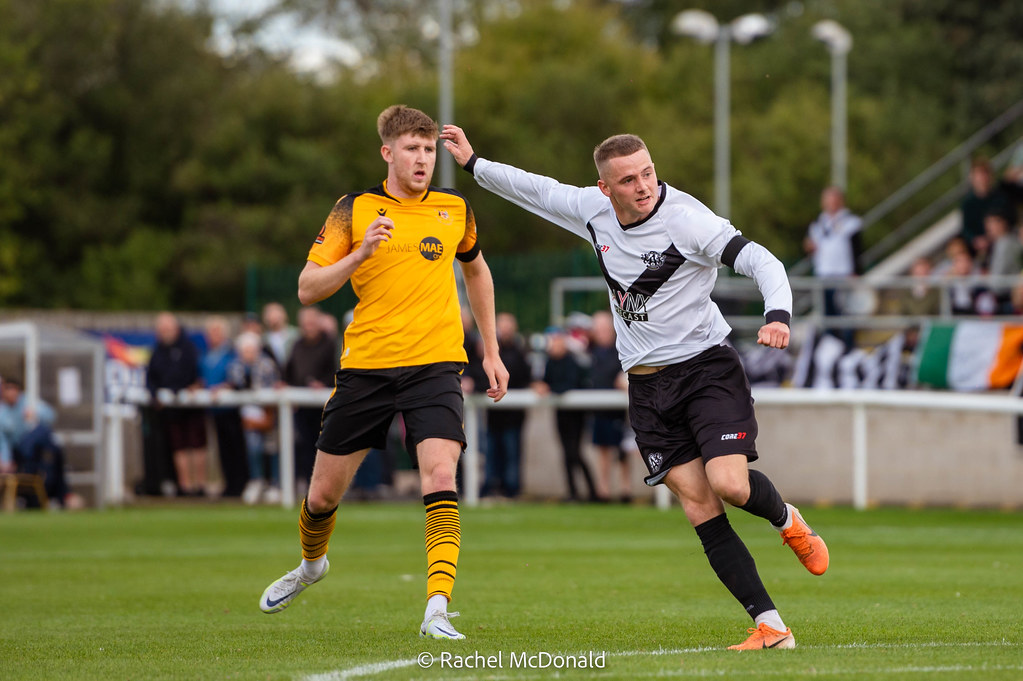