Two goals in the first half from striker Liam Jarvie condemned Ashington to a fourth consecutive league defeat – and third in a row on their home ground – as Newton Aycliffe became the latest outfit to leave Woodhorn Lane with easy pickings on Saturday.

Until recently, the Colliers had been having a decent season and at one stage they were even one win away from being second top of the first division of the Ebac Northern League. However they had also leaked far too many goals on their travels as they conceded five at West Auckland, Thornaby and Whickham and four at Crook Town.

Now their home record has come under scrutiny – and when Ian Skinner’s side go to face basement side Billingham Town on Saturday (April 2), they’ll be glad to see the back of March.

The Wansbeck side had suffered only three defeats on home soil all season in 15 outings – until this month when Seaham Red Star, Guisborough Town and Newton Aycliffe have all claimed maximum points.

However, the recurring theme is that Ashington not only give goals away – they gift wrap them as well – and such was the case on a beautiful spring day at The dwmedia Stadium on Saturday.

There was little to choose between the two sides early doors in what was a very cagey opening – until the tenth minute when the Colliers allowed Jarvie to charge through the middle and plant a right footer from the edge of the area, wide of ‘keeper Adam McHugh.

On the quarter hour, Aycliffe ‘keeper Adam Pickford touched over a goalbound free-kick from 25 yards by Max Cowburn then skipper Ben Harmison played the ball sideways for Danny Anderson to drive wide.

Jordan Lashley, Dean Briggs and Cowburn then combined but the latter directed his effort over the bar.

On what was National non-league day, the game was flat and lack lustre with no real tempo to it – but two minutes before the interval, the visitors doubled their advantage.

Anderson was caught in possession and although the midfielder chased back to make a tackle on Jarvie in the area, he was penalised for a foul with Jarvie sending McHugh the wrong way from the resultant spot kick.

Within the opening minute of the second period, Lashley fired off target from distance then Briggs released Ben Sampson who scooped the ball wide.

There was more intensity from the home side but another promising move fizzled out after Liam Doyle and Anderson had played a one-two with the full back over running the ball.

However in the 65th minute, a key turning point arrived when Briggs missed a sitter to reduce the arrears. He seized on a back-pass and side stepped the advancing Pickford but with an open goal at his mercy, under hit his effort which allowed Aycliffe skipper Aaron Brown to clear the ball off the line.

Pre match Skinner had been boosted with Sampson and Tom Bramley both declaring themselves fit – the latter after being side lined for over six months – and midway through the half, Skinner rolled the dice by throwing Bramley into the fray at centre back and pushing Harmison up front.

The move paid dividends with Harmison giving Ashington a presence up front and causing problems for the visiting back four.

And in the 81st minute, it was Harmison who halved the deficit firing home after Jamie Hanson had unselfishly pulled the ball back.

Referee Graeme Hopper remained unmoved after the Colliers had three separate shouts for a penalty – two for handball and the other for a foul on Hanson – then in the fifth minute of time added on, McHugh pushed the ball out to deny Andrei-Vasile Ardelean. 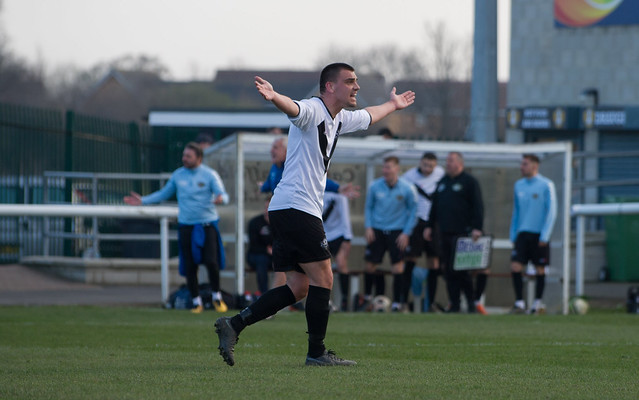