Ashington’s home form came up trumps again as two goals in four minutes from Bobby Taylor and Lewis Suddick during the second half saw the Colliers deservedly pick up three points against Bishop Auckland at The dwmedia Stadium on Saturday.

Before the start of the campaign, manager Ian Skinner had challenged his players to turn Woodhorn Lane into a fortress – and after being forced to do things the hard way after going behind to a wonder strike shortly after the interval by Bishops Auckland’s Matty Waters, the Wansbeck outfit hit back in fine style.

The quickfire double by Taylor and Suddick was just the tonic they needed too following the disappointment of a 5-3 reverse the previous week at Whickham and spurred on by the encouragement and noise generated by their supporters in a crowd which swelled just over the 400 mark, they recorded their 11th victory on home turf from 15 league outings.

Ashington had had a convincing 5-2 win over the Bishops in mid September but since then, the Heritage Park outfit have brought in former Guisborough Town and Whitby Town boss Chris Hardy as manager who has changed their fortunes and they went into this showdown unbeaten in four outings.

On a sticky surface, there was little in the way of free flowing football in the opening half.

But it was Ashington who went close in the eighth minute when Taylor – one of six changes in the side – struck a right footer just over after good work by Thomas Kalthoeber and Craig Spooner.

What was to emerge as the move of the period arrived a few minutes later when the home side worked the ball neatly through the midfield but Kalthoeber’s pass for Adam Johnson had too much weight on it and the ball ran out for a goal kick.

A dangerous looking cross by Bishops left back Liam Miller was headed away to safety by Luke Salmon then a patient build up by the Colliers saw a goalbound effort from Johnson tipped away for a corner by ‘keeper Nicky Liversedge.

Salmon, Kalthoeber and Suddick linked to set up Johnson but his cross was blocked then play switched to the other end and a promising run by Marcus Giles was halted when Curtis Coppen made a brilliant tackle inside the area.

Suddick fired narrowly wide from distance with Liversedge rooted to the spot and the last action of the half came when Kalthoeber – who had been heavily involved down the right flank – shot well wide after a corner on the right.

Ashington were rocked at the start of the second half as the visitors went in front – after only 18 seconds.

Coppen won a header but the ball bounced off Waters and fell perfectly for the striker who unleashed a dipping half volley from 20 yards wide of ‘keeper Adam McHugh and just inside the far post.

As Ashington looked for a response, Kalthoeber was again in the thick of the action and after showing some skill inside the Bishops penalty area where he clipped the ball over the head of a defender, he drove wide of the far post.

However the Wansbeck side turned the game on its head with two well crafted goals in quick succession.

The equaliser arrived in the 64th minute as Kalthoeber’s throw-in on the right went over the top of a defender and after work by Johnson , the centre forward rolled the ball across for Taylor who with the outside of his foot, steered the ball wide of Liversedge and inside the post.

Kalthoeber was also involved in the goal which put Ashington ahead and which proved to be the winner as he advanced into the area and laid the ball off for Suddick who instinctively swept home with the inside of his foot into the far corner.

Liversedge pushed the ball aside to deny Spooner then seconds after being introduced as a substitute, Dean Briggs had a glorious chance to give his side a two goals cushion.

Johnson played the ball across but Briggs stroked it wide with only the ‘keeper to beat.

Briggs went close with a left footer flashing just wide then ten minutes from time the home side survived a scramble following a cross from the left by Miller. McHugh was forced to make a superb save before Yannick Aziakonou cleared the ball off the line.

Liversedge thwarted Briggs again but despite the aforementioned late scare, the final whistle brought a welcome and merited victory for the Colliers. 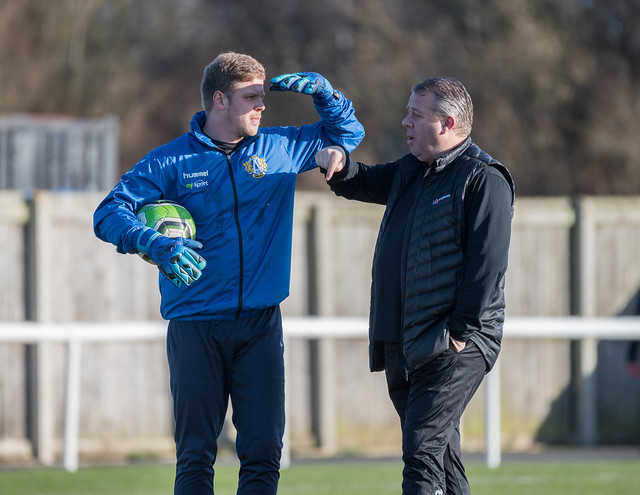