Ashington’s Ben Harmison and Craig Spooner both hit doubles as the Colliers turned on the style before picking up maximum points against West Allotment Celtic at The dwmedia Stadium on Saturday.

The Wansbeck outfit did things the hard way too after conceding early on – but kicking into the teeth of a very strong wind as well as driving rain in the first half, they hit back immediately and played some scintillating football – much to the delight of their supporters in a splendid crowd of 301 who did their best to shelter from the elements.

It was crystal clear from minute one that the wind was going to have an impact on proceedings – yet a thrilling first half ended with the home side holding onto a slender 3-2 advantage.

The North Tynesiders took the lead on the quarter hour. From a right sided free kick, Jacob Forster’s header went across home ‘keeper Karl Dryden before hitting the post and Mikel Thompson slotted home the rebound.

However Ashington’s riposte was to draw level with a minute. Spooner sprayed the ball out wide to Liam Doyle who delivered a pinpoint cross which was met by skipper Harmison who headed powerfully home from six yards.

The Colliers got on top and went 2-1 up in the 26th minute with the lively Spooner applying the finishing touch.

The ex North Shields midfielder began the move half way inside the Allotment half again finding Doyle on the right who in turn played the ball to Lewis Suddick. Suddick crossed low for Spooner who got in front of a defender and clipped home a side footed effort across Allotment’s debutant ‘keeper Reece Monaghan and just inside the post.

Minutes later, a restart from Suddick was flicked on by Spooner which caused problems for the visiting rearguard but Thomas Kalthoeber was denied at the far post then the visitors kept the ball out after a goalmouth scramble.

Four minutes before the interval, Ashington got a third. Suddick’s free kick found Harmison who prodded the ball goalwards. Kalthoeber and a defender then got touches before Harmison had the final say netting from close range.

However, barely sixty seconds later, the Colliers backed off allowing Matthew Hayton to advance through the middle and steer a low effort from 20 yards wide of Dryden to make it 3-2.

If Spooner’s first goal had been the culmination of a well worked team effort, his second – which came three minutes after the interval – was individual brilliance.

He received the ball, advanced then curled a stunning left footer from 22 yards which left Monaghan grasping thin air before the ball screamed inside the top corner.

Dean Briggs had a shot held by Monaghan before a header by Jack Errington following a corner was cleared off the line by Doyle and Dryden.

The visitors then suffered a blow when Callum Larmouth – who scored a hat-trick in the corresponding fixture and 3-3 draw in late August – pulled up with what appeared to be a hamstring injury.
Ashington continued to press and in the 63rd minute, came close to a fourth. Great link up play down the left flank between Paul Robinson and Jordan Summerly saw the latter pull the ball back but Briggs’s shot was cleared off the line by Michael Leech and Doyle’s fizzing low cross just eluded his team mates arriving at the far post.

Two minutes later, a 25 yards free-kick by Spooner was superbly pushed over the bar by Monaghan then Robinson and Summerly combined again to set up another opportunity for Briggs who was also thwarted by the ‘keeper as he palmed the ball to safety.

The players were adapting well on a gluepot of a pitch but ten minutes from time, Allotment were reduced to ten men. Substitute Sam Bryan – who was introduced on the hour mark and who was cautioned five minutes later – received a second yellow card from referee Mark Ryan following a tackle on sub Karl Ross.

In the closing stages another home sub Adam Johnson had a left footer from the edge of the area parried then collected by Monaghan before the final whistle saw Ashington – who went into this contest after back to back defeats against Sunderland Ryhope CW and North Shields – collect a richly deserved victory. 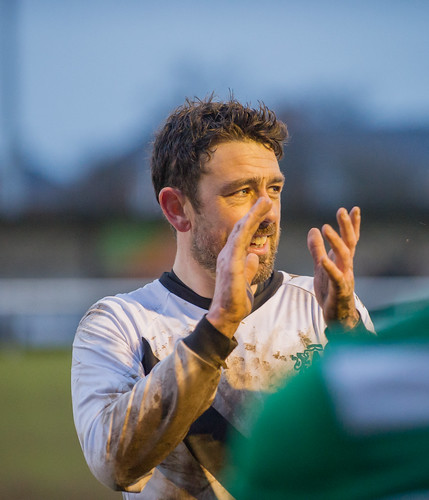