Ashington left it late – before they kick started the New Year with a win against basement side Penrith at The dwmedia Stadium on Saturday.

Trailing early on to a Jamie Armstrong penalty, the Wansbeck outfit eventually equalised on the hour through Jordan Lashley but it was not until the dying embers of the game that the home side wrapped up the points with goals from Adam Johnson and Dean Briggs.

The match – played out on a heavy pitch at Woodhorn Lane – was only one of three which went ahead in the first division of the Ebac Northern League and the victory saw the Colliers leapfrog over Newton Aycliffe to claim sixth place in the table.

Both sides (Ashington and Penrith) had been inactive for three weeks over the festive period but there was no sign of lethargy as they went toe to toe with each other in a contest which never dropped in tempo throughout.

The Colliers made inroads in the ninth minute when the ball came in from the right flank and Penrith ‘keeper Aaran Taylor made a double save from a header Paul Robinson and the follow up by Ben Sampson.

In their next raid, Johnson fired over but the home crowd were silenced in the 13th minute when against the run of play, Charlie Birch surged into the Ashington area and went tumbling under a combined challenge from Liam Doyle and Yannick Aziakonou.

Referee Chris Joyce immediately pointed for a penalty and Armstrong sent Karl Dryden the wrong way with a coolly taken spot kick to the ‘keeper’s right,

Ashington exerted pressure and had a quarter hour spell of dominance. Sampson blasted over; an in-swinging corner from Lashley clipped the base of the post whilst Craig Spooner and Lashley snatched at further opportunities.

Penrith defended well and in the final third of the period, it was Dryden who prevented the Cumbrians from extending their lead.

In one break, Matthew Story was through until a superb retrieving tackle by Aziakonou inside the area averted the danger.

Shortly before the interval, Max Brown wriggled clear but was denied by the sprawling Dryden then the stopper parried another effort from the centre forward who missed a sitter somehow putting the rebound wide.

After the break, Robinson cut in from the flank and his shot hit the upright with Lashley having a shot blocked.

It was a day of frustration for the home side but they kept up the pressure and were patient – and eventually drew level with a brilliantly worked goal.

Not for the first time in the match, Jordan Summerly and Robinson linked superbly down the left and the latter sent over a precision cross which was headed home at the far post by Lashley.

The game then developed into a cat and mouse affair with Ashington going all out in search of a winner whilst their opponents posed a threat on the break.

However, several key aspects emerged in the final 20 minutes.

On a stamina sapping pitch, home manager Ian Skinner introduced fresh legs at different stages sending on Briggs, Bobby Taylor and Danny Anderson withdrawing Aziakonou, Lashley and Doyle whilst in the 75th minute, Penrith were reduced in number when Matthew Moynan – booked in the first half – upended Johnson and was sent off for a second yellow card offence.

Briggs fashioned an opportunity as he cut inside but lashed over and with the ten men defending resolutely, it looked as if the visitors were going to hold out for a point,

But five minutes from time, Johnson unlocked the door with a piece of sheer brilliance. He received the ball into his feet, spun sharply then whipped a low drive across Taylor and inside the far corner.

In the last minute of the 90, Ashington must have thought they had sealed the result when on a swift counter, substitute Taylor had a shot blocked and Briggs made no mistake blasting home the rebound to make it 3-1.

In time added on, a curling free kick by Birch thudded against the post but Ashington’s riposte saw Curtis Coppen play a great ball forward where Robinson and Summerly featured again before the ball was eventually blocked on the goal-line. 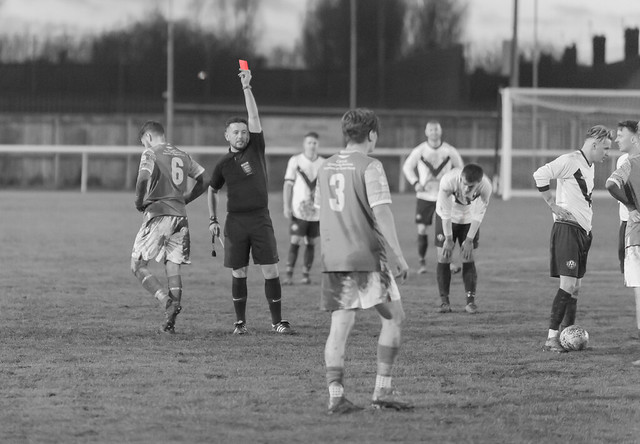