Ashington turned in a woeful performance against Heaton Stannington on Saturday which culminated in them losing their unbeaten tag in the first division of the Ebac Northern League.

Following their exit from the Emirates FA Cup at King’s Lynn, the Colliers had had to pull out all of the stops to rescue a point in a 3-3 draw against Newcastle Benfield in midweek and for all they had a lot of possession on Saturday, they simply could not find a way through a well organised visitors defence.

Consequently Ian Skinner’s side failed to score for the first time in the league this season – on a day when they again set a new league attendance at Woodhorn Lane. Saturday’s crowd of 618 came only four days after they had attracted 602 against Benfield.

The pivotal moment of the game came in the 28th minute.

A weaving run inside the area by Dean Briggs, where he shrugged off two challenges, came to an end when he was upended by Jordan Watson and referee Scott Henry awarded a penalty.

Home skipper Ben Harmison – who had scored with his last three spot kicks – again stepped forward but saw his effort parried out by ‘keeper Greg Purvis diving to his left.

The rebound fell into the path of Briggs whose drive thudded against the post – and when The Stan countered at pace down the left flank, Ashington were caught out at the back.

Incredibly the whole phase of play – which was wrapped up inside sixty seconds -provided the only highlights of an otherwise dreadful and abject first period.

Apart from an early half volley by Dan Maguire went well over; a 25 yarder by Yannick Aziakonou which went the wrong side of the post and a header by Heaton’s Joe Shepherd which was gobbled up by ‘keeper Karl Dryden following a free kick, the game was totally devoid of goalmouth action.

The second half faired only marginally better.

Four minutes in, the visitors survived after a goalmouth scramble after an in-swinging corner on the left by Andrew Cartwright then on 52 minutes, Craig Spooner – one of a trio of substitutes introduced by the home side at the break – fired a left footer just over.

Ashington tried to find a way through but were rebuffed by a resolute Heaton Stannington side who sat in and defended well.

Lee Mason had an opportunity but his effort was weak then from another corner by Cartwright, Briggs cut inside but shot over.

With ten minutes remaining, a long ball by sub Ryan McKinnon was glanced on by Harmison – now playing upfront – but the drive from Briggs was powder puff and easily dealt with by Purvis.

Another sub Adam Johnson saw a back header drift wide and in the closing stages Spooner had an effort from the edge of the area deflected behind before a free-kick by Liam Smith in the fourth minute of stoppage time went straight down Purvis’s throat. 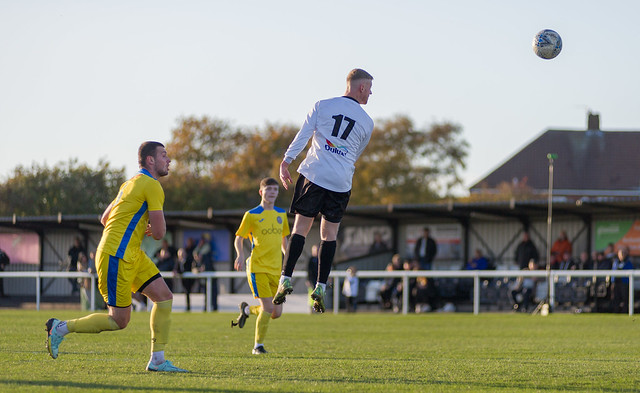