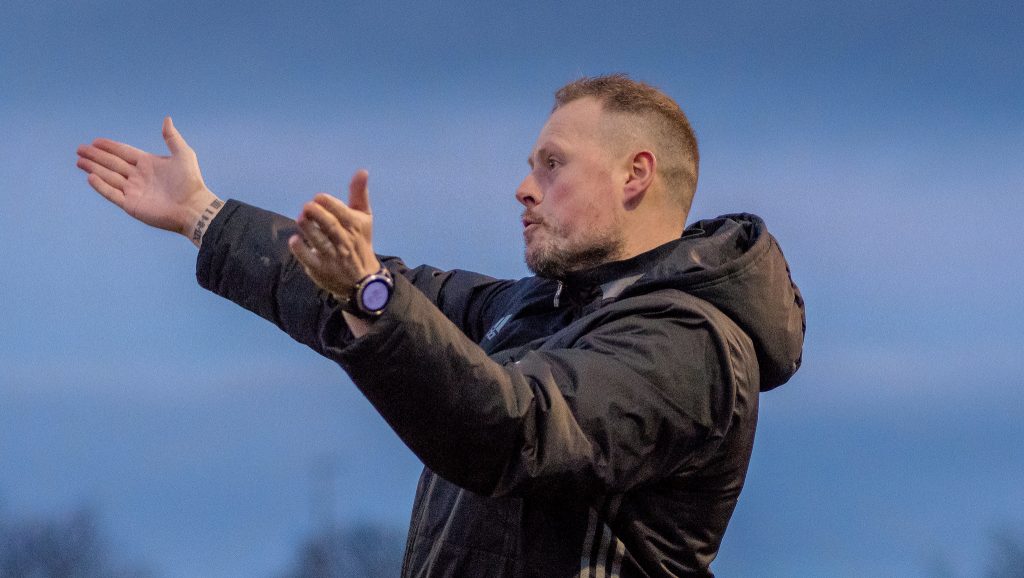 Ashington FC’s assistant manager Andy Coyles was delighted after the Colliers had strung back to back victories together with the slender 1-0 verdict against Seaham Red Star on Saturday.

Lee Mason’s emphatically struck penalty just prior to half time was enough to make it maximum points from two games for the Wansbeck side following on from the 2-1 win over Penrith the previous week.

On a windswept day near the coast, the game was competitive. It contained little in the way of goalmouth action – but Coyles was nevertheless pleased on several fronts: “That’s two wins in two games after a bad run of form,” he said afterwards, “It doesn’t matter how you do it – three points is all that matters. It was ugly at times today and we knew conditions were difficult especially in the first half but in the second period we just managed the game well. Did we play well by our standards? No – but game management wise, I thought we were excellent; our decision making was good and we played in the right areas at the right times.”

He continued: “I thought our lads were resilient in that first half. It was a really strong wind which they were kicking against and as a result, anything which we attempted going forward just kept coming back no matter how we played. We broke the play up when we needed to and our objective was to come in at half time with a clean sheet which we achieved.”

Mason tucked home from the spot after Dan Maguire had been fouled in the box – a decision which was disputed by the home outfit: “It was fantastic to go ahead,” added Coyles, “I thought there were two key moments in the opening half. The first came on 24 minutes when Ben Harmison made a one-on-one tackle at the back and his timing was excellent – if he didn’t get it right it would have either been a penalty or the Seaham lad would have been through on goal. The second incident was the link up play which led to the penalty and we got our just rewards for our hard work.”

He continued: “I think it was our first half display rather than our second which won us the game and it’s about momentum now. All the top teams have to play each other and points will be dropped from now until the end of the season and our aim has to be to keep things going and continue to put points on the board.”

Several players came in for warm praise from the assistant boss: “I thought there were a couple of stand out performances,” he said, “When Karl Ross came on as a substitute, I thought he was fantastic. He was running around and gave us an extra ounce of energy; Ben Harmison defended really well at the back and made some last ditch tackles; Ben Sampson was very good in the middle of the park and I think he has had two and a half very solid games because when he came on against Whitley Bay, I thought he did very well. However, someone else who deserves a mention is Damen Mullen. He was a huge miss in those four games where we only managed to collect a draw and since he came back it’s no coincidence that we’ve started picking up the points and collectively our performances have been a lot better with him in there as the midfield general.”

He added: “We’ve got a tough week with three games in seven days so again although it’s all about getting the points it’s also about managing the players and getting the best out of them. Whether our supporters realised it or not, during that recent spell of four games where we weren’t able to pick up as many points as we would have liked, we had a lot of injuries but now those players are all back and fighting fit. We have got a healthy squad – there is competition for places – and that can only be good.”