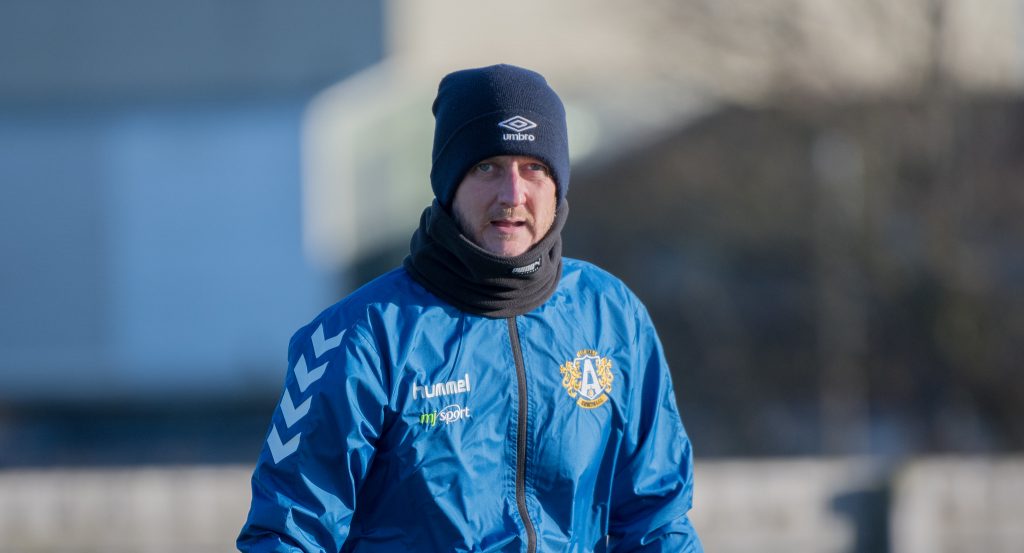 IAN SKINNER: “LET’S SEE IF WE CAN GO ON ANOTHER POSITIVE RUN – WHICH WE ARE MORE THAN CAPABLE OF DOING”

Ashington FC manager Ian Skinner has challenged his squad to replicate the vast majority of the first half of the season as the second segment gets under way on Saturday (January 7) with the Colliers at home to Penrith (3pm).

Skinner – whilst having his Festive celebrations dampened following the 2-1 defeat on Boxing Day against Whitley Bay at Woodhorn Lane – said that on reflection, the club can’t be anything other than pleased with the first half: “Obviously the current run of four games without a win slightly dampens where we are and probably takes a little bit of the shine off but what we can’t do is to forget or lose sight of where we have come from,” he said, “I’ve been reflecting a little bit now that we are at the half way point and it’s the first little bump in the road that we’ve hit in a while. We finished last season on a massive high by winning the Ebac Northern League first division cup and then for the first competitive game of the new campaign, contested the Cleator Cup final against North Shields and got a positive result with a 3-2 victory. So in two games, we were successful in collecting two pieces of silverware – and for ten years prior, this club hadn’t won anything.”

He continued: “We started the season really, really well, winning seven and drawing two of our first nine league games and then went on that amazing run in the Emirates FA Cup where we beat teams from two and three divisions above us but since that defeat in the fourth qualifying round at King’s Lynn, it’s interesting. Since that day we haven’t quite been the same if I’m honest, winning five, losing four and drawing two matches. And if you look at King’s Lynn, they’ve suffered a little bit the same. So they had a good result against us then beat Doncaster before they lost to Stevenage – and since then they’ve stuttered a little bit in the league and are trying to find their feet in terms of getting back on track. I said it at the time that the FA Cup is a fantastic competition when you’re in it but it’s ruthless and the minute you go out, it’s a massive comedown and you’re forgotten about. We’ve rode our luck a little bit since we got knocked out so after leading 2-0 against West Allotment Celtic, certainly scoring in the last minute to get the winner was pleasing (after they had come back to level at 2-2) and we followed that with a fantastic result against Bishop Auckland (5-0). I think what we have just got to remember is yes the last four games have been disappointing but where we actually are as a club considering where we have been previously. Yes we should be further ahead in terms of points to where we are but that said we’ve only lost four league games so far. We are half way through and if we were to only lose four more in the second half of the season, we’ll be in with a decent shout (at the top end of the table).”

He went on: “We have got to get back to the standards we set earlier in the season and that will come from working hard but in terms of overall reflection, I think we can’t be anything other than pleased with the progress which the club is making. Probably not as pleased as I would have been three or four weeks ago when I would have used the word ‘delighted.’ But we have got to keep putting things into context. This football club hadn’t won silverware and hadn’t progressed as far in the FA Cup for many years and hasn’t been challenging in and around the top two and three in the league for a long time either. We’ve sat down as a group and had a little look at where we now are at the half way stage. There have been one or two things spoken about in terms of needing to improve whilst not forgetting all the hard work we have done and whilst our last four results is starting to become a slight concern, it’s not a crisis. It’s maybes about refocusing and realigning our goals to what we want to achieve come the end of the season and kicking on in the second half and taking things week by week and game by game. Let’s not get too carried away and let us stick together. We all need to row in the same direction and see if we can go on another positive run which we are more than capable of doing. There’s no doubt in my mind that this group of players I’ve got are good enough to go on another long unbeaten run – that’s the challenge to them – and if we can do that, we’ll see where it takes us.”

Also looming up in the near future, is Ashington’s away tie against Heaton Stannington in the quarter final of the Techflow Marine Northumberland Senior Cup on Wednesday January 18 with the winners at home to North Shields or Blyth Spartans.

Skinner has had his players in for training since the reverse against Whitley Bay and for Saturday’s game against Penrith hopes to be able to choose from virtually a full squad of between 20-22 players.

Meanwhile Ashington Football Club were saddened to hear of the passing of Barry Hindson. Barry covered games on the radio for BBC Newcastle featuring teams in our region and was a stalwart of the non-league scene. The club send their condolences to Barry’s family and friends at this sad time.