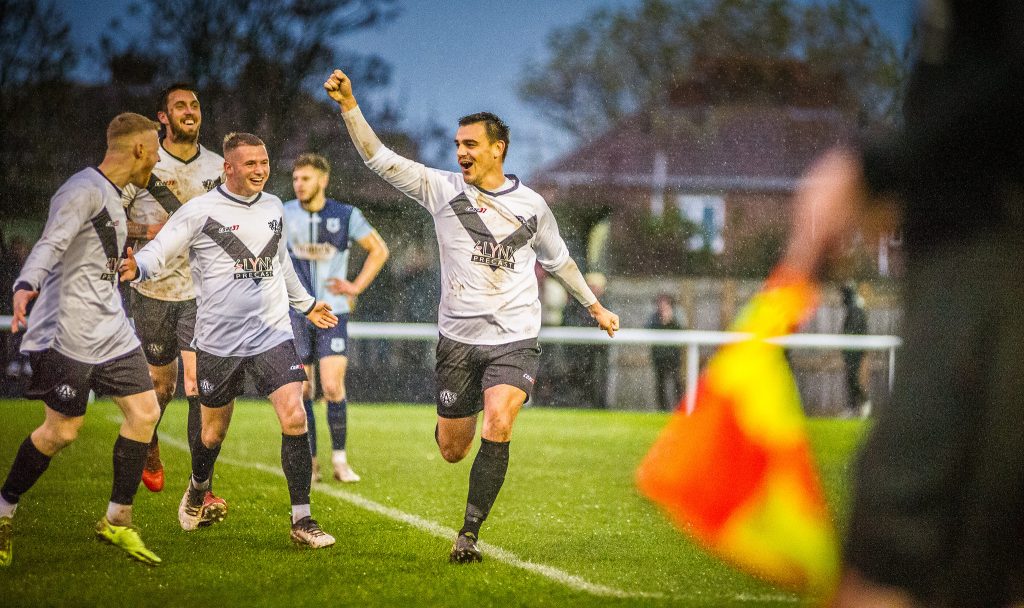 Midfielder Ben Sampson put the icing on Ashington’s cake on Saturday when he scored a wonder goal in the 5-0 hammering over Bishop Auckland at Woodhorn Lane.

Sampson’s strike – an outstanding chip over ‘keeper Nicky Liversedge from fully 35 yards – was the Colliers fifth on the day and the 23 year old admitted afterwards that it was one of his best ever: “I don’t score many but the goal today is up there as being one of my best ever,” he said, “I won the ball, spotted the ‘keeper off his line and definitely meant to chip him (the keeper). It was a thoroughly enjoyable moment and the fans were just brilliant.”

Sampson – who complimented the County Durham outfit, labelling them as being a ‘very good team’ – reckons Ashington’s convincing result was a ‘statement win.’

“It was a massive win – and a statement win,” he said, “Bishop Auckland are a very good team and they have quality players who moved the ball around well in the first half. We managed to get the first goal which was an outstanding effort from Lee Mason and that gave us a good grounding. For the last three games Ryan McKinnon has come in and been outstanding at the back. We have looked so solid and have never looked like conceding. Our quality shone through in the second half today and the floodgates opened for our goals – but we also stuck in at the back, didn’t concede and to come out with a clean sheet was an added bonus.”

The Colliers are without a midweek fixture this week and Ashington-born Sampson believes the squad will welcome the break: “We had a long run in the Emirates FA Cup and after we went out of the competition to King’s Lynn, we returned to league action,” he said, “We played Newcastle Benfield and Heaton Stannington where I thought we were the better team in both games but dropped five points out of six and it was felt we needed to relax. In general, lads have played a lot of big hard games so although we are training twice this week, the break will help and do the squad good. We have strung three wins together against Thornaby, Whickham and Bishop Auckland and I think we are back on track and bang on form.”

Meanwhile Morpeth-based Sampson says the standard of football which the current squad are serving up has reached ‘a different level.’

“I’ve been at Ashington for five or six years now and the quality of our football on the pitch now has gone to a different level,” he added, “I’m loving it here.”