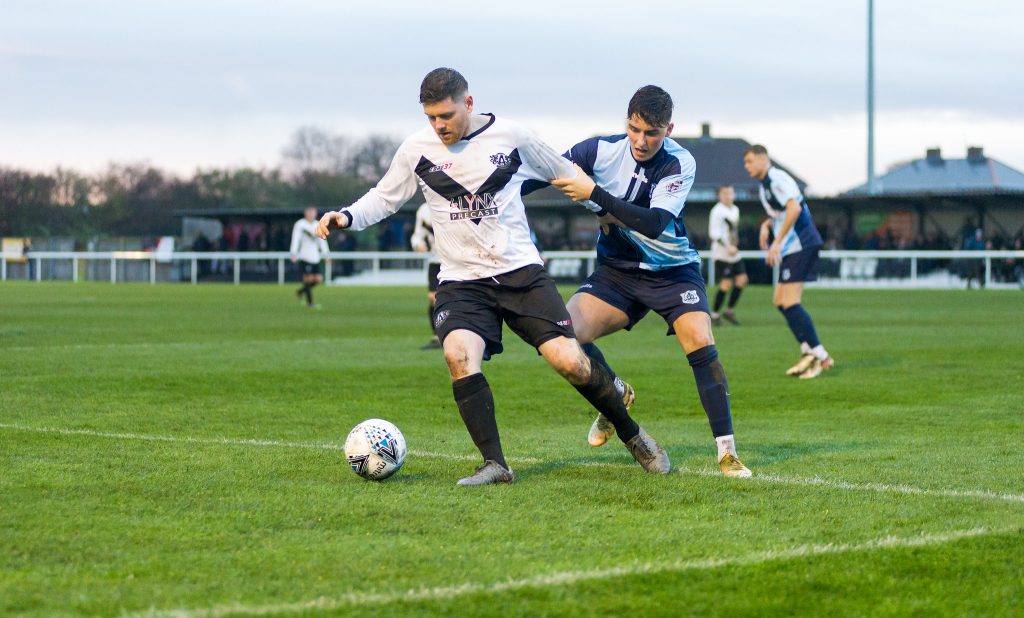 It was Mason’s tenth strike of the season and his second in three games – but the 31 year old admitted that he is still playing through the pain barrier with an injury which has plagued him for four months since the start of the pre season fixtures: “I’ve had achilles tendonitis since our first warm up match against Alnwick Town at the start of July,” he said, “It went for a week but last Tuesday as soon as I started running it was back. It’s so painful – and that’s why the manager is bringing me off in games but the injury aside, when we went 2-0 up against Bishop Auckland, the best thing to do was to get fresh legs on so again, I was happy to come off.”

On fireworks day, a rocket from Mason just past the half hour mark, gave his side the lead: “It was a great ball by Ben Sampson into Ben Harmison who is always going to win his headers,” he said, “Sure enough, Ben (Harmison) has headed it down and luckily for me, it’s bounced and sat up nicely. I knew I was hitting it first time regardless and I’ve just struck through it and the way I’ve hit it, its went away from the ‘keeper which obviously makes it better. As soon as it left my foot I knew it was going in because I could see the ball curling away into the net.”

Newcastle-born Mason was also involved in Ashington’s second after he was clipped inside the area and Harmison converted the resultant spot kick: “When the ball dropped, I was actually going to hit it first time but I nipped in front of the defender, took a touch and he took my feet away. It was nailed on penalty and Ben (Harmison) has stepped up to tuck it into the back of the net.”

Mason was substituted on the hour – so was able to admire the fifth goal by Ben Sampson: “At first, I thought it was a through ball for Ben Harmison to be fair – but don’t take anything away from Ben Sampson’s finish,” he added, “He’s been tremendous – not just today – but over the last month or so. To burst through from the half way line, see the ‘keeper is off his line and to chip him, Ben (Sampson) has scored a brilliant goal and it topped off our performance in the second half really.”

Meanwhile Blyth-based Mason – who works for the Council – is happy the Colliers have a free midweek: “The pitches have been a bit heavy recently at Thornaby and today at Woodhorn Lane so I think a free week and rest will do us good,” he said, “Regardless of the run we had in the Emirates FA Cup, today’s clash was massive because it was probably one of the biggest games of the season so far. Take nothing away from Bishop Auckland who I thought were good in the first period but for us to put on a show like we did, especially in the second half put a statement out. It showed that we can mix it up in the big games in the FA Cup and also when we come back to league duty that we are ready to go again and get the results we need.”