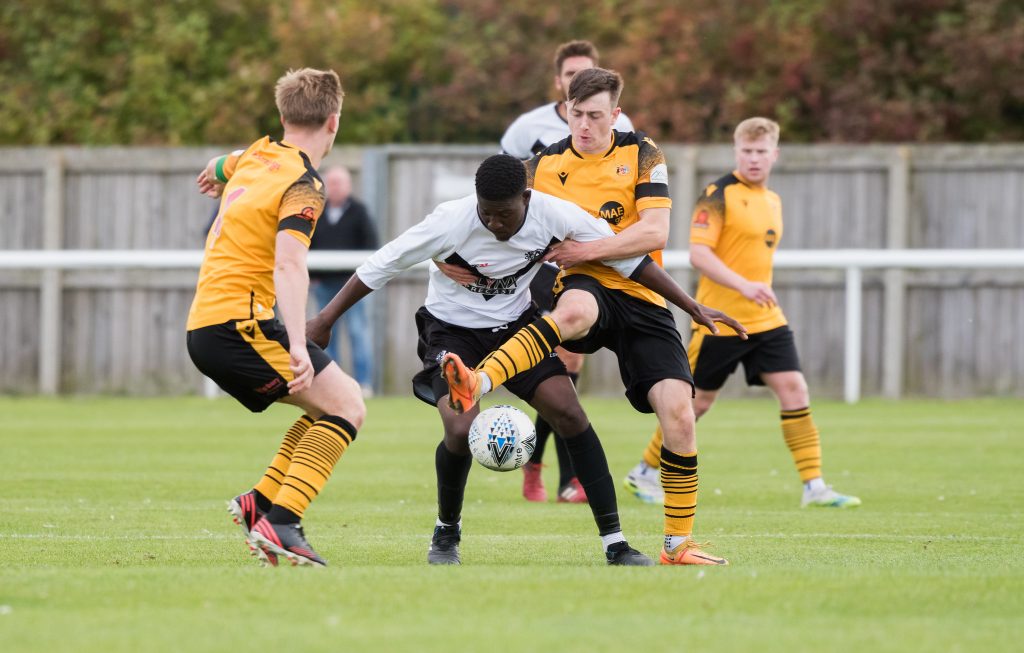 Ashington FC midfielder Yannick Aziakonou said it was ‘unbelievable’ to play in such a red hot atmosphere on Tuesday night at Woodhorn Lane as the Colliers brushed aside a higher status club for the third time this season in the Emirates FA Cup when they completed a 3-0 victory over Stocksbridge Park Steels.

Ian Skinner’s side have now knocked out Ashton United, Bradford Park Avenue and Stocksbridge Park Steels in consecutive rounds on their way to a fourth qualifying round tie against King’s Lynn on Saturday week (October 8).

Aziakonou said afterwards: “Playing in front of that record crowd of 1,424 was unbelievable. As soon as we heard about what the numbers could be attendance wise, it was just a case of us making sure we could perform for them. The fans were our 12th man because they pushed us on from the start. It was great and I’d like to thank them so much for that because their support is massive.”

The 23 year old got the ball rolling for the Colliers when he smashed home a half volley from 30 yards in the fourth minute and he said: “The ball was in the air for quite a while and it was a case of watching it (the ball) all the way. I got a good connection on the half volley and the ‘keeper was rooted to the spot. I was delighted when the ball hit the back of the net.”

Four minutes later, Paul Robinson headed home to double the lead and Aziakonou – who is based in Fenham – was also pleased when Ben Sampson put Ashington 3-0 up, ten minutes into the second half: “The third goal came at a good time for us,” he said, “The boys kept pushing and we thought we could have scored more especially with the quality we have got up front but we’re happy with a 3-0 win.”