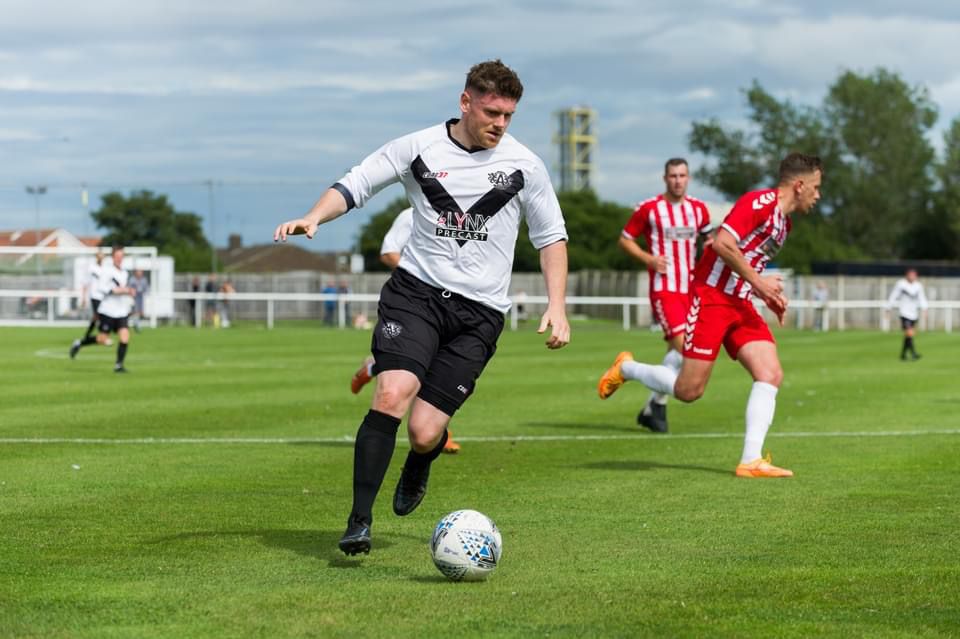 Lee Mason, one of manager Ian Skinner’s summer signings at Ashington, said he was delighted to open his goal scoring account in the 6-0 hammering of Seaham Red Star on Saturday – but added that it was a great start to the new season for the club.

In the build up to the curtain raiser, Newcastle-born Mason – signed from Dunston UTS – was a doubt and he commented: “I’ve been struggling with my achilles. I’ve got a bit of tendonitis with the hard grounds but it’s manageable – so I was lucky to start and play a big part today. I was glad to get off the mark, especially being a striker. To score twice, it obviously gives you confidence and relieves you of that little bit of pressure of not scoring and it was the same for Dan Maguire – it was good to see him on the score sheet as well.”

After the Colliers had knocked on the Seaham door, Mason broke the deadlock in the ninth minute and added a second at a similar time after the interval. However he complimented two of his team mates: “For the first goal, it was a great cross by Andrew Cartwright on the right hand side. I just nipped in front of the centre back and got the faintest of flicks – and it was good to see the ball go in off the post at the back stick. For the second, it was a superb delivery from Dean Briggs from a free kick and I was unmarked at the back post. It was an easy kind of opportunity to score and I was glad I took it.”

Shortly afterwards, the 31 year old was substituted – but was not too bothered about missing out on a potential hat trick: “My achilles had been hurting so when the manager took me off I wasn’t disappointed at all,” he said, “It was more about giving it (my ankle) rest as we have another home game against Northallerton Town on Tuesday.”

Mason – who lives in Blyth and works for the Council – revealed he is settling into his new surroundings: “Today it was a great start to the season – not just for myself – but for the lads who scored for the club in general and also for the fans to see that score line. I can’t speak highly enough about the club – you’ve just got to look at the ground and facilities and the players we have got here.”