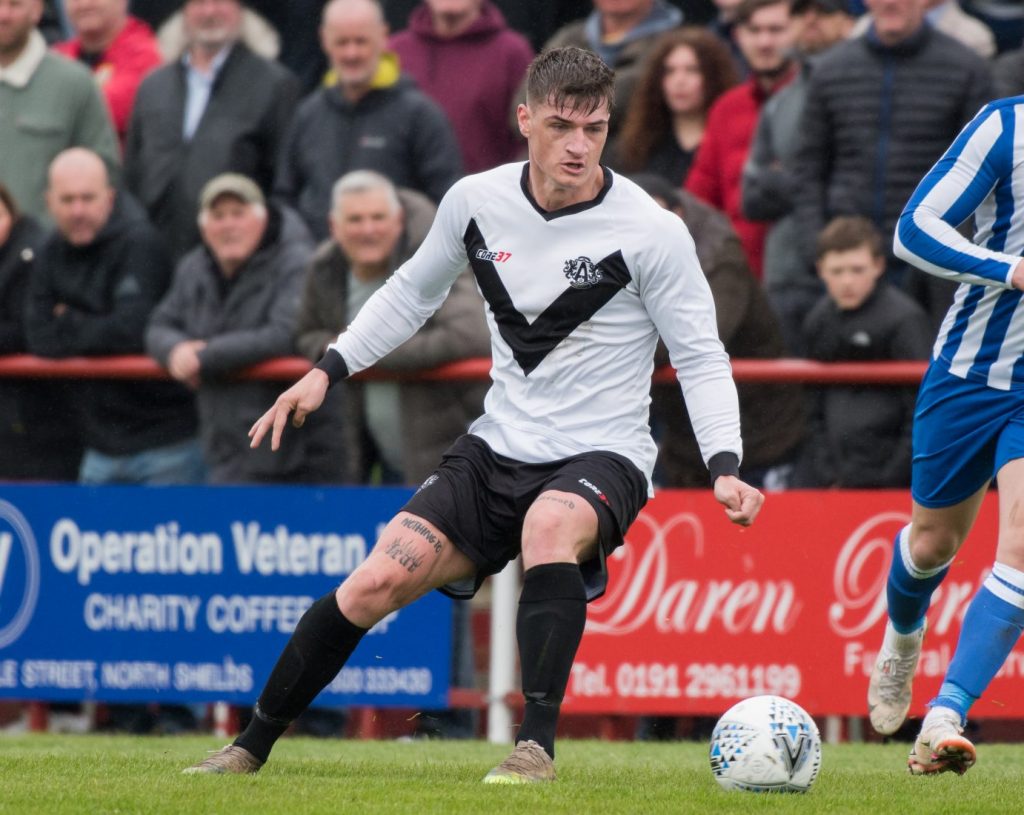 Ashington FC’s Jordan Summerly could not hide his joy after being chosen as the management Player of the Season at the presentation awards ceremony on Saturday.

And – fingers crossed – the North Shields-born defender is looking to maintain a clean bill of health on the injury front and hoping that he can now put a nightmare two years firmly behind him after being sidelined with a knee injury.

He said: “Because of problems with my knee, I hadn’t played in ages and didn’t sign for anyone until the start of last season – and even then I reckon Ashington manager Ian Skinner probably took a punt on me and didn’t think he’d get many games out of me. But thankfully I played loads and cannot believe it. I’m so happy because I thought I would play a few weeks and my knee would go again then I’d have to have an operation and face another year out and look to the next season – but touch wood, I haven’t had any problems.”

Whitley Bay-based Summerly – who announced he is staying with the Colliers – continued: “The award is the icing on the cake and to say I’m delighted is a huge understatement. I didn’t think I was in contention to be honest until I spoke to the manager (Ian Skinner) on the phone the other day and we were looking ahead to next season – and he was saying ‘you were excellent last term considering we weren’t expecting you to play as much.’ I’d had two years of knee injuries so I didn’t expect to play as often either. I honestly thought after a couple of months my knee would ‘go’ and I would have to have an operation. However thankfully me knee was all right all through last season and I played most of the games.”

The 25 year old added: “I was at North Shields for a long time and I loved that club. I never thought I would like a club as much but everybody at Ashington are so welcoming and the set up is unreal. I get on with all of the lads and I’ve never been in a dressing room where the team spirit is so good.”

He went on: “I’m very happy about staying here next season. Maybes we need to add a couple of players for strength and depth but there’s no reason why we can’t go on and win the league as well as having a good run in the FA Vase.” Manager Ian Skinner said: “We brought Jordan in at the start of the season. We knew what he was capable of producing on a regular basis but we also knew he had missed the last two years with a serious knee injury. To be honest, we weren’t sure how much football we would get out of him – and he wasn’t either – but Jordan played in 98 per cent of the games last season. He was a pretty consistent performer and I can’t think of too many disappointing games he had – or games where he has been disappointed with his own performance – so all credit to him.”