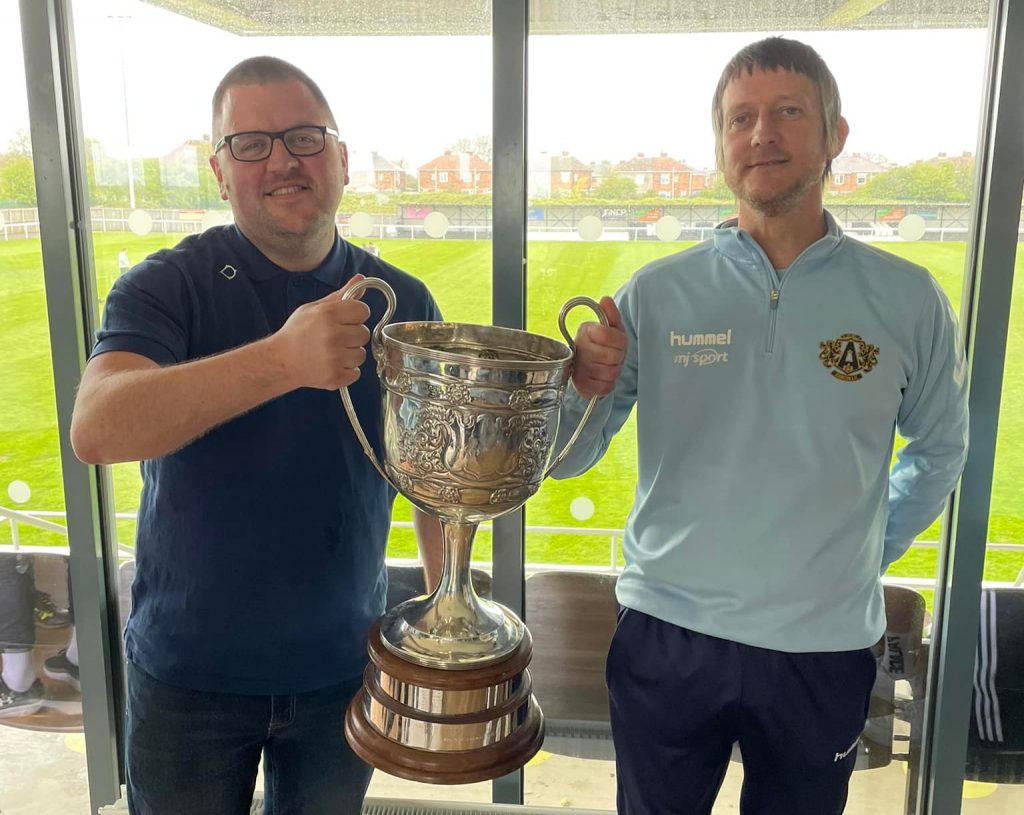 Ashington FC manager Ian Skinner was ecstatic at the final whistle after his side had swept Newcastle Benfield away to win the Ebac Northern League’s Division One Cup on Bank Holiday Monday.

The game was staged at the Daren Persson Stadium – the home of newly crowned ENL champions North Shields who have consequently been promoted – and saw the Colliers stroll to a 4-1 victory with goals from Paul Robinson (2), Lewis Suddick (penalty) and Dean Briggs whilst Aiden Haley replied for the Lions.

And afterwards Skinner said: “First and foremost, I’m really, really delighted for the players. I think the way we have played and the way we have attacked games this season, warranted us getting something to show for it. The amount of goals we have scored – and conceded – plus the entertainment we have served up along the way, I’m chuffed that the lads have got their just rewards. I’m also delighted for the people (supporters) who have turned out, and it was no surprise that they have come out in their hundreds today because they’ve done it all season and it’s really nice that they have got something to be proud of and something to shout about with a little bit of bragging rights too.”

He continued: “To be honest, I’m also delighted for the town as well. Ashington is a place which gets lots of bad press – sometimes rightly so – sometimes not so rightly so – but it’s a tight knit place. Two days ago, I was at Ashington Cricket Club watching my local cricket team get a fantastic win against Lanchester – and the cricket club lads have been here today supporting the football team. Obviously it helps with our skipper Ben Harmison – who plays for them hitting an unbeaten 94 off 51 balls – then he’s lifted the cup for us today and it’s great because Ashington is a real sporting town. Obviously everybody knows about all these fantastic footballers and sportsmen who have come out of the town and it’s nice that at the level at which we operate, we have been able to put a trophy in the cabinet. It’s a really pleasing way to end the season and somebody has mentioned today that not only do we end the season with a cup final but we potentially start next season with one in terms of we will play the Cleator Cup against North Shields – so that’ll be something to look forward too but that’s a long way off.”

He went on: “What we will do is to enjoy today for a little while and we’ll have an end of season presentation and get together – then the vicious circle which is football, we’ll all start planning again and looking ahead to next year and seeing if we can go one better. We have finished eighth in the league and have won the cup, doing it the hard way after beating Thornaby, Guisborough and Consett along the way before Benfield in the final and the players deserve massive credit.” He concluded: “I’m delighted for the club with the amount of work which goes on behind the scenes by all the volunteers that nobody sees – and overall it was a great day for everybody.”