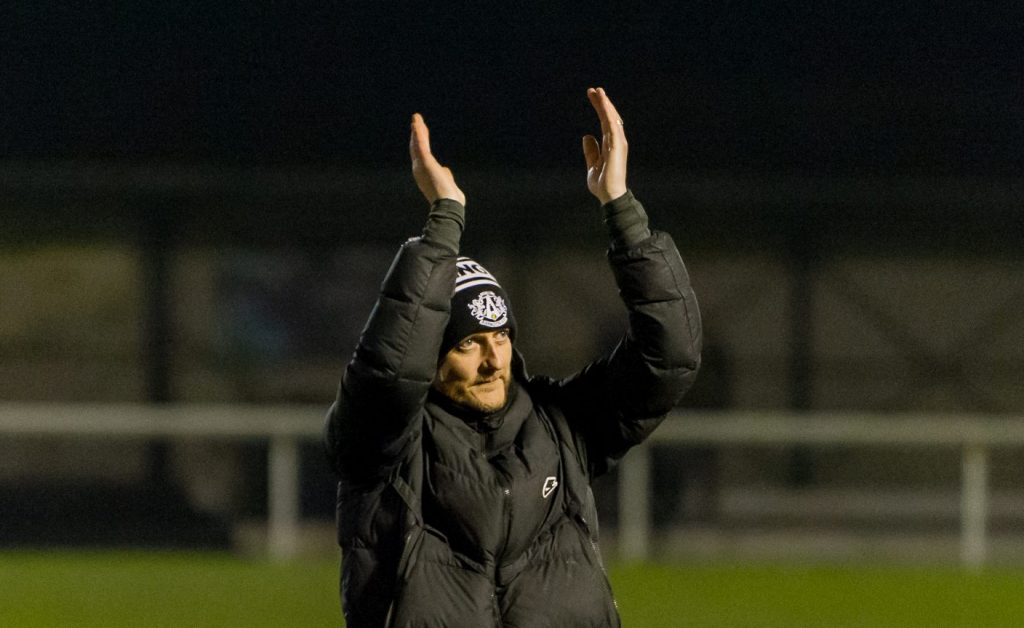 Ashington FC manager Ian Skinner could not have been more proud of his squad of players than on Tuesday night when they won an epic cup tie 4-3 at Woodhorn Lane against Consett to reach the final of the Ebac Northern League Division One Cup.

And afterwards, the delighted boss said: “I’m going through a rollercoaster of emotions at the moment. As usual, Ashington have to do things the hard way but by hook or by crook, we have got through which is all that matters. However, if I’m honest, I’m delighted for this group of players.we’ve worked them hard all season; we’ve never given them time off; we’ve had them in twice a week and even if we’ve had a midweek game, we’ve still trained leading into the Saturday. We’ve really demanded high levels of performance, attitude and commitment off them and they have given that and it showed in the early part of the season when we played some fantastic free flowing football and scored goals freely. Yes we conceded more than we should but that led to the entertainment.”

He continued: “Tonight’s win wasn’t about me – it was about them (the players) getting something to show for the hard work they have put in throughout the season. It’s for each and every one of them because they have all played their part and it will be nice to take them to a final – but it’ll only be a good occasion if they take that extra step and come out winners.”

Reflecting on the seven goal encounter Skinner added: “The supporters who have come through the turnstiles have certainly seen a typical Ashington cup tie. Everybody knew what was at stake but we didn’t want to over-egg things – we wanted to treat it as just another game. We asked the players to give everything they had, to leave nothing out on the pitch, to have no regrets – and only they could go and get what they deserved. We started the game really well and went 1-0 up where the ‘keeper. (Kyle Hayes) has made a decent save but Ben (Harmison) has followed up and managed to scoop the ball home. Then we’ve conceded a typical Ashington goal where we didn’t close the ball down and Carl Lawson has struck it lovely from just outside the box. You think ‘okay settle down a bit’ and they’ve had lots of possession which we expected but we always felt that if we got our pressing traps right we could pinch something high up. It was a great move for Jordan Summerly’s goal which put us 2-1 ahead as we switched the ball from right to left.Jordan has cut inside brilliantly and finished it well then Dean Briggs has managed to press the centre half and pinch it off him and has had the legs on the two defenders. To be fair Dean has missed a few lately so I was delighted when I saw the ball roll into the bottom corner for 3-1. I then thought we managed the game but whilst they (Consett) had periods of possession they didn’t really threaten the goal.”

He went on: “Second half, we just wanted to be nice and solid and use the ball and take the opportunity if it came. They went down to ten men – from my viewpoint I thought it was a little bit harsh then for about a ten minutes spell, I thought we controlled the game quite well and moved the ball quite well. But whether it was nerves or tiredness, we seemed to surrender possession awfully cheaply and allowed them (Consett) to build. They brought two good forwards on in Scott Heslop and Dale Pearson and looked to play forward a little bit quicker with some quality down the sides.we conceded a poor goal a,lowing a free header from a corner then we conceded a penalty with seven minutes to go. Again it was possibly harsh but there was no need to make the challenge. Adam (McHugh) has got a good record on saving penalties. He’s a big imposing goalkeeper but Colin Larkin has scored to equalise. At 3-3 with around five minutes to go and us looking a little bit jaded, I wondered if that would really knock the stuffing out of us and are we almost going to hold out for penalties? But fair play to the lads because we’ve kicked off, have been really positive and drove at the heart of them. The ball has gone to Craig Spooner who has taken a wild swing at it but he’s sliced it straight to Briggs who has scored with a great finish across the goalkeeper and we’ve been due a bit of luck. Then Adam (McHugh) has made a save with 20 seconds left and when the final whistle went you just think “relief.”

On Saturday (April 16), Ashington play their final league game of the season when they travel to face Consett. Thomas Kalthoeber, Tom Bramley and Max Emmerson are all ruled out with injuries whilst Luke Salmon is suspended and ‘keeper Karl Dryden is unavailable.