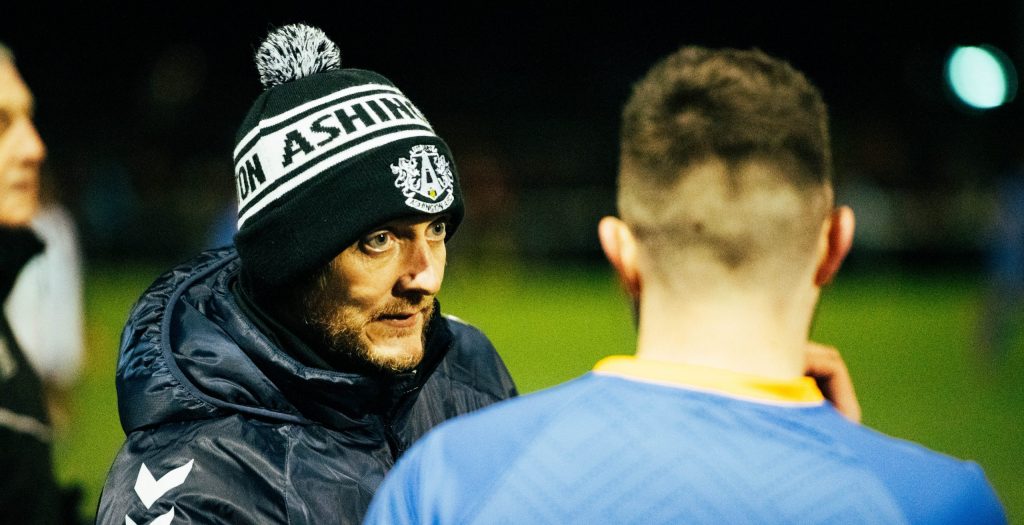 Ashington FC manager Ian Skinner praised his outfit after they had put up a spirited showing despite losing 2-1 against promotion chasing North Shields at The dwmedia Stadium on Tuesday night.

The Woodhorn Lane boss said afterwards that their were aspects of the performance which had pleased him but also spoke bluntly about how his side had shot themselves in the foot – not only once but twice for the goals which they conceded.

Skinner said: “It was a similar story to Saturday at Sunderland Ryhope. I thought we started the game really poorly – and I will take some of the responsibility for that because we didn’t had an opportunity to train before tonight’s game and I just wanted to make a couple of small tweaks. So I changed our match day warm up routine just to try and get one or two messages across and it possibly led to a little bit of a less than tense session and maybes that played a part in our slow start. Having said that, you can’t give North Shields striker Dan Wilson the amount of space we did to turn, get a shot at goal and score. We then did really well to come back and we scored a fantastic equaliser when Dean Briggs switched the play to Jordan Summerly. We talk about the final third – and Summerly did brilliantly to get to the by-line before he’s pulled the ball back and Lewis Suddick has tapped in at the back post.”

He continued: “We then shot ourselves in the foot again. A long ball up and Wilson has won the first header. The ball dropped to Chris McDonald and we haven’t got out to press the ball quick enough. Mcdonald has hit it from quite a distance – 20 yards at least from left to right and it’s gone in – and again it’s a really poor goal to concede having done so well to get back into the game. I thought some of our combination play in the first half in and around the penalty area was very good. I just wanted us to be a little bit more forceful. We saw a lot of the ball and created a couple of good opportunities but came in at half time 2-1 down whilst Shields played quite direct if I’m honest.”

He went on: “After the break, we wanted to continue where we had left off with our combination play in and around the box and switch the play quickly from side to side because Shields try to play quite narrow and central – but the half never really got going. Certainly they (Shields) looked as if they were content to sit in and see if they could just prevent us from breaking them down whilst they offered very little going forward. We probably moved the ball a little bit too slow and at times when we had space to go and run with the ball to draw Shields onto us, we didn’t do that and gave the ball away with unforced errors and to be honest I thought the game just petered out. We made poor decisions like crossing from poor angles; hanging everything up for the goalkeeper (Oliver Marshall) whose handling was impeccable to be fair but we are the sort of team who need to be playing quick combination play in and around the box with little give and goes and third man runs – and we never really got that. We almost looked a little bit devoid of one or two ideas and went that little bit more direct and that little bit long crossing the ball early – and we haven’t got players that suit that style. We haven’t got big bustling forwards who will run and put their head on things – we’ve got good technical footballers and that’s why we tend to try and play our way.”

He added: “Some of our play in the first half when we had the ball was great but needed to be better in the second half. We were always in the game and I threw some subs on to try and freshen things up but it didn’t make a massive difference. Obviously I was disappointed with the result; disappointed with certain aspects of our play particularly out of possession and I think we need to be tougher to play against. We sometimes can be a little bit too easy to play against when we haven’t got the ball.”