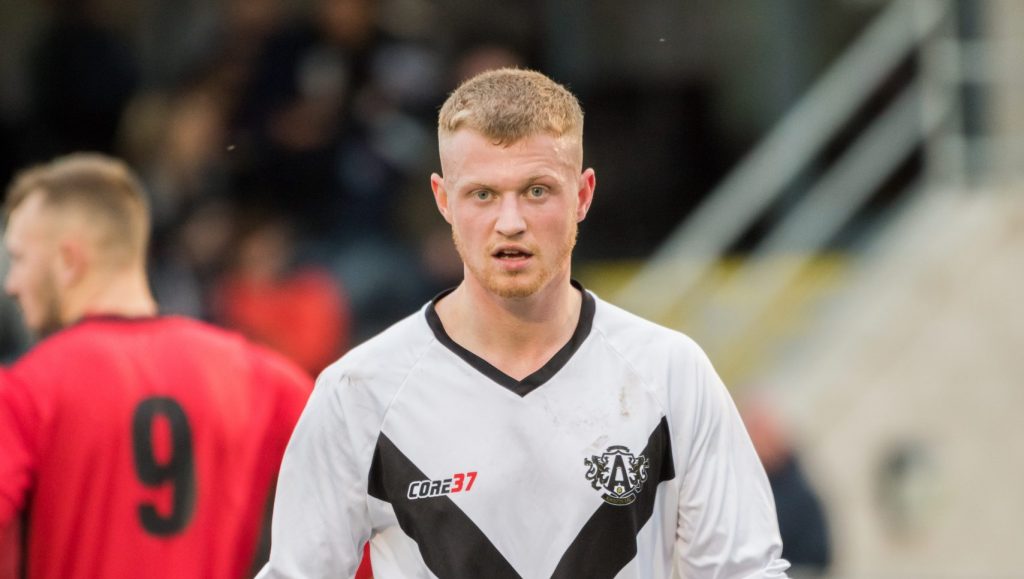 Ashington FC’s newest recruit, Adam Johnson was pleased with his debut in the 3-3 draw against Consett on Saturday – and revealed that had he scored, it would have topped the day off.

Johnson – who was signed from Blyth Town in midweek – had a hand in the first goal as the Colliers took the lead against the league leaders and he said afterwards: “Ashington are a really good club to be part of. They are very ambitious and the facilities here are great. I’ve enjoyed my first game and I was happy with the graft I put in – but I could have done a bit better with the chances which came my way and if I had scored that would have been the cherry on the top of the cake. However, I was delighted to be involved in the opening goal which was a great move down the right hand side when Max Cowburn and myself combined and led to a great header from Craig Spooner.”

Johnson – who has joined his home town club – continued: “It was a really good game to be part of today. It was hard work and a good battle but they are the best games and are great for the supporters to watch as well. We’ve definitely got the backing of the fans who were noisy today and I think the club can go a long way.”

The 24 year old striker caught the eye at the beginning of last month when he was part of a Blyth Town side who came so close to causing an upset in the Techflow Marine Northumberland Senior Cup – against Ashington – at The dwmedia Stadium on an awful wet and windy night in Wansbeck.

Johnson scored a double – one goal in either half – to put the second division side 2-0 in front but the Colliers went through after scoring three times in the final quarter hour with the winner coming in stoppage time.

“The game is still fresh in my mind,” said Blyth-based Johnson, who is a factory worker in Cramlington “but now I’ll be kicking my heels because I can’t play for Ashington in the quarter final against Newcastle under 23’s next month because I’m cup tied!”

Ashington FC manager Ian Skinner said: “I think AJ (Adam Johnson) should be pleased with his debut because I certainly would if I was in his shoes. We had a little decision pre game today against Consett about do we throw him straight into the side or do we ease him in. If I’m honest, he’s a centre forward and we’ve been playing a little bit without one so we thought ‘we’re at home and we’ve now got a centre forward so why have a one on the bench and not on the pitch’ – so we gave him the number nine shirt.” He continued: “Adam trained really well and looked sharp and what we saw in training we saw on the pitch today. He works tirelessly for the team; he’s always a threat; he’s quick and strong; he looks to run in behind; he chases things and I think he’ll be a good asset in terms of helping us stretch the opposition. Adam said he was a little bit disappointed with the chances he had – and on another day he might have scored – but as debuts go in terms of his endeavour, work rate, effort, application and the bit of quality he showed, he should be delighted. We took him off with 90+3 minutes on the clock and part of the reason was to help us see the game out. The other was because I wanted him to get a bit of recognition for a player who has stepped up from the second division of this league into the top flight and who was thrown straight into the team against the league leaders (Consett).”