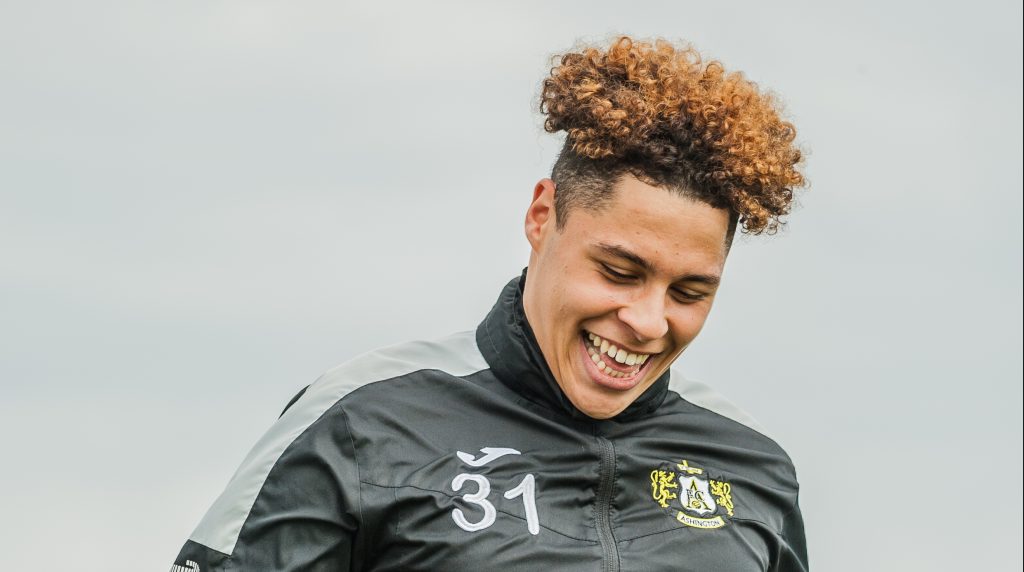 Ashington FC midfielder Max Emmerson has been ruled out for the rest of the season after tearing his Anterior Cruciate Ligament (ACL).

The 20 year old sustained what can only be termed as a freak injury eight games into the campaign in the 1-1 away draw against North Shields.

Last week North Shields-born Emmerson – a student at Sunderland University – received the results of a scan which revealed that he needs surgery for a full reconstruction of his knee.

“I have completely torn my ACL,” he said as he took in Ashington’s top of the table clash against Consett at The dwmedia Stadium on Saturday, “I’ve got to go in for surgery later this month then it’s a recovery period of possibly six to seven months. I was more disheartened at first, not knowing the extent of the injury and although I’m gutted I’ve learned to accept the situation after being told what the diagnosis is.”

He continued: “I was enjoying playing for the club (Ashington) and the game when I did the injury against North Shields was one of the biggest of the season for me. It happened ten minutes into the match when I turned. My legs stayed rooted whilst my body went the other way. There was no contact with any other player.”

Ashington FC boss Ian Skinner said the club will support the Newcastle based youngster all the way: “It’s the news we feared to be honest,” said Skinner, “On the night when it happened, I just had this feeling that it was an ACL injury and all along we have worked towards that being the outcome. Our club physiotherapist Jay Robertson has looked at Max multiple times and felt it was an ACL and we just needed the results of the scan to confirm it.”

He continued: “I’m devastated for Max because he’s been fantastic for us since he came to the club and it’s probably the biggest setback he’s ever had in his football career. The good thing is that because we thought it was an ACL, Jay (Robertson) has been doing some pre op work with Max so when they do operate, he will obviously have some strength in and around the area.”

He went on: “As a club we will continue to support Max and it was great to see him at the game today (v Consett) and as soon as he has had the operation, I’m sure we’ll help him 100 per cent with his rehab. It’s a one of those situations where there are no short cuts – and he knows that – so he’ll do the rehab to the best of his ability and follow the guidance which he is given. Obviously we’re disappointed to lose Max for the rest of the season but we’ll look forward to seeing him back in a black and white shirt in the not too distant future.”