Billingham Town shattered Ashington’s dreams of a hoped-for extended run in this season’s Isuzu FA Vase on Saturday when they hit the Colliers for six at Woodhorn Lane.

Bang went the 100 per cent record; bang went the impressive number of games where they had conceded only a handful of goals so far this term and bang went one cup competition with the Wansbeck side turning in their worst showing of the season.

On the other hand, the Teessiders deserved their success in what was a crazy game which see-sawed from literally start to finish.

There was mayhem as five goals were scored in an action-packed first 13 minutes.

Ashington took the lead on four minutes. Darren Lough found Luke Salmon down the left and when he crossed into the middle, Lee Mason was left unmarked to prod the ball home.

Barely sixty seconds later, Christopher Wallace rattled the crossbar with a shot from 25 yards but in their next move, Ashington lost possession and Luke Spalding fired into the top corner past ‘keeper Karl Dryden.

Four minutes later, skipper Ben Riding headed in from six yards from a Robbie Bird corner on the left but in the next minute, Dean Briggs played the ball into the danger zone where Mason’s back flick beat ‘keeper Jordan Harkess and found the net.

However, as the crowd tried to get their breath back, the 13th minute proved to be unlucky for the home side as Spalding curled a delightful left foot effort around Dryden and inside the far post to put his side 3-2 ahead.

Robbie Dale had a shot blocked and from the follow up, Mason was denied his hat-trick when his effort struck the bar.

Karl Ross and Briggs had chances before Ashington got themselves into a defensive tangle with Bird being denied by Dryden who saved with his legs.

In the 38th minute, Dale played the ball to Briggs who from the edge of the area, calmly passed the ball inside the bottom corner for the equaliser at 3-3.

And there was still more to come. Five minutes later Dale played a swift one-two with debutant Liam Smith before firing the ball into the roof of the net from eight yards.

Then in stoppage time, Dale and Mason combined with Dale’s shot being blocked by Harkess.

Two minutes into the second period, an audacious lob from fully 35 yards by Briggs was held under the bar by Harkess and when play switched, Luke Salmon made a vital interception to stop a cross from Jack Pounder.

However, in the 56th minute it was 4-4 when Pounder headed home following a throw in on the right.

The Teessiders got their noses in front again in the 74th minute when Dryden pushed out a shot but from the rebound, Ben Heeley found the net firing home from an acute angle.

However four minutes later, a significant turning point arrived when substitute Adam Johnson and Briggs both had shots kept out following a cross from Dale.

As Ashington continued to push for a leveller, Johnson struck the ball wide from a Salmon back header.

But in the 88th minute, Billingham sealed their victory on the break when Pounder drove across Dryden on the half volley.

In stoppage time, Dale found Craig Spooner whose right footer thudded against the bar -before the final whistle saw the Colliers exit the competition at the first hurdle.

Forward signed from Blyth Spartans. Dan has represented England at C level, a quick and busy forward, who is capable of both linking play and running in behind opposition defence. Dan has a real eye for goal and will offer a good attacking threat for the squad. 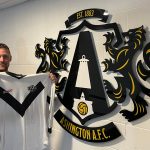 Darren has returned to his hometown club ahead of the 2022-23 season having previously played for the Colliers between 2010-2012.

During his time away he was two time FA Vase winner at South Shields and Hebburn Town.

Forward who is comfortable playing across the front line with very good technical ability. Lee is a strong runner with the ball and creates chances for himself and others. Previous clubs include Whitby Town, Whitley Bay, Blyth Spartans, North Shields, South Shields and Dunston UTS.