A bullet-like header by Ashington’s Lewis Suddick quarter of an hour from time saw the Colliers deservedly lift the JR Cleator Cup after a five goal thriller against North Shields in front of a crowd of over 400 at Woodhorn Lane on Saturday.

Suddick will rightly get the plaudits for his stunning effort from a pin point Dean Briggs free-kick – but there was so much more to admire from the gutsy Wansbeck outfit.

They went into this match – a billing between North Shields (last season’s first division champions) and Ashington (the division one cup winners) – without a recognised centre half.

Thomas Kalthoeber and Robbie Dale formed the pairing at the back – but things got off to the worst possible start when Kalthoeber limped off after only six minutes with a hamstring injury.

First half goals for the Shields men from David Robinson and Dan Wilson sent Ashington into the break 2-0 down but after the interval, Ian Skinner’s side rallied quite superbly and after quickfire goals from Danny Anderson and Lee Mason, Suddick’s effort completed a dramatic turnaround.

There was an explosive start to proceedings with both sides manufacturing a chance inside the opening two minutes.

With only 55 seconds gone, home ‘keeper Karl Dryden could only look on as a left footer from Cam Cunningham drifted narrowly wide.

Play immediately switched to the other end with skipper Dean Briggs wriggling through before laying the ball off for Dan Maguire but the striker saw his shot turned away by Shields stopper Finlay Hodgson.

Referee Matthew Cain then penalised Hodgson for picking up a back-pass and from the restart, Briggs cut inside but saw his shot blocked.

The visitors took the lead after 18 minutes – albeit in fortuitous circumstances.

David Robinson’s shot from the edge of the area took a massive deflection off a home defender to loop up and spin over the stranded Dryden.

Shortly afterwards, Briggs missed out heading wide at the far post after a cross from Jordan Summerly before Dryden somehow kept out a free kick from 25 yards by Cunningham.

In the 37th minute, Wilson doubled his sides lead. Robinson nodded a cross from the left back into the middle and Wilson planted a header into the roof of the net.

But cue an Ashington fight back which started only four minutes inside the second half.

Following a corner on the right, the ball ping-ponged inside the box and Dale had a low shot blocked but the ball ran for Danny Anderson who squeezed his effort inside the post.

Mason then had a shot which was also blocked – but the striker made no mistake in the 58th minute which brought his side level.

Substitute Karl Ross brilliantly won a tackle just inside the Shields half and when Mason got possession, he cut inside before drilling a left footer wide of Hodgson.

On 71 minutes, Suddick was one of three substitutes introduced and netted what proved to be the winner – and how Ashington deserved it! 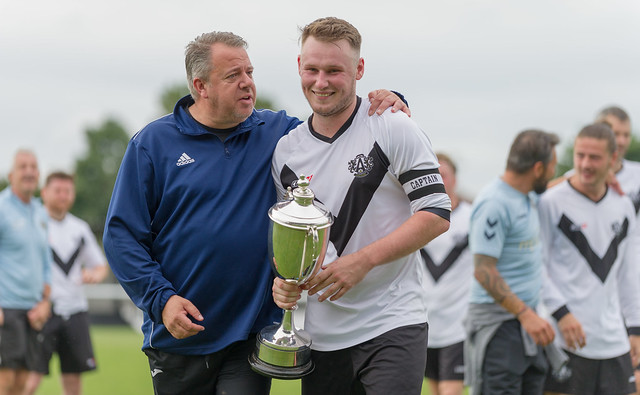 Forward signed from Blyth Spartans. Dan has represented England at C level, a quick and busy forward, who is capable of both linking play and running in behind opposition defence. Dan has a real eye for goal and will offer a good attacking threat for the squad.