Ashington suffered penalty heartache on Tuesday night as they bowed out of the Techflow Marine Northumberland Senior Cup against Newcastle United under 23’s – on an historic night at The dwmedia Stadium.

Jay Turner-Cooke and Cameron Ferguson nudged the Magpies into a 2-0 lead by the hour mark before the Colliers levelled after staging a great comeback with two goals in five minutes from Karl Ross and Craig Spooner.

It set up an exciting finale which included a chance for either side in stoppage time before the game went to a penalty shoot out. Newcastle led 4-3 when Danny Anderson had his spot kick pushed aside by ‘keeper Will Brown and the under 23’s booked their place in the semi finals when Nathan Carlyon tucked away their fifth.

However off the pitch, the fantastic turn out of 1,357 saw Ashington smash through their previous record attendance of 1,229 at Woodhorn Lane.

There was little in the way of goalmouth action in the early stages. Indeed the first opening came in the 13th minute when Dean Briggs – on his return – found Luke Salmon on the right but the midfielder lofted his effort over.

Liam Doyle then played the ball in for Briggs but he was snuffed out before Ross was clear but stumbled after being fouled and the danger evaporated.

Lucas de Bolle had Newcastle’s first shot from 20 yards which was held by home ‘keeper Karl Dryden but midway through the half, the young Magpies went ahead when Turner-Cooke hooked home a downward volley at the far post after a cross from the left.

On the half hour, Dryden made a crucial save to deny Newcastle a second. Ferguson pounced on a defensive error but his effort was blocked by Dryden.

It was the last goalmouth action in a period where the home side just could not find any sort of rhythm – and they also lacked composure on the ball.

After the break the visitors were in control and after Turner-Cooke had played a cross too far ahead of the incoming striker, a ball played in by skipper Jack Young saw Charlie Wiggett miss out.

Ferguson doubled his sides lead when a move started off by Young led to a cross from the right where Ferguson turned on a sixpence and fired into the corner.

Then all of a sudden, it was as if Ashington pressed a switch which saw them have belief – and they bounced back to level with two quickfire goals, the first in the 70th minute.

Manager Ian Skinner had just made a triple change introducing Danny Anderson, Paul Robinson and Max Cowburn for Salmon, Bobby Taylor and Briggs – and when Cowburn floated an inviting ball into the area, Ross headed over the advancing Brown and into the net.

Incredibly, now with momentum, Ashington’s best move of the night resulted in the equaliser.

Cowburn’s delightful chip over a defender released Doyle in the area and when his cross was only partially cleared, the ball fell to Spooner who caressed a low right footer wide of Brown and just inside the post.

In the next minute, there was action at both ends. A lovely ball over the top by Coppen released Doyle but his pull back was played behind his team mates in the area then when play switched, Turner-Cooke drove wide.

Ten minutes from time, Dryden made a great save diving low to his right to keep out a full blooded drive by Rosaire Longelo then the same player got on the end of a through ball to lob over Dryden. Turner-Cooke got to the ball ahead of Coppen to net but the score was ruled out for offside.

The thrills and spills continued until the final whistle. Robinson and Summerly worked a one-two down the left flank which ended with the latter driving the ball across the face of the goal.

In the first minute of time added on, Spooner’s through ball for Cowburn just lacked a bit of pace on it which allowed Newcastle to clear but seconds later, Young – the outstanding player of the park – flashed a shot narrowly wide from distance.

Then came the shoot out. On target for Newcastle were Young, Adam Wilson, Longelo, Turner-Cooke and Carlyon with replies from Ben Harmison, Robinson and Cowburn. 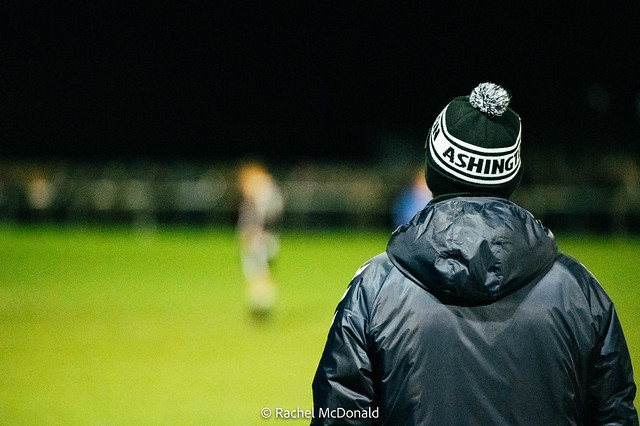