Danny Anderson’s first goal for two years earned Ashington a deserved share of the spoils in a 3-3 draw against league leaders Consett at The dwmedia Stadium on Saturday.

It was exciting. It was pulsating and it was captivating – and in perfect weather conditions, it was also on a day where Woodhorn Lane smashed the Ebac Northern League’s record attendance for the season to date with a superb crowd of 735 who certainly got value for money.

The Colliers went into the contest on the back of a 5-0 defeat against Thornaby the previous Saturday. But as was highlighted during the week by new skipper Ben Harmison, Ian Skinner’s side have a canny knack of bouncing back in their next outing.

And bounce back they did with aplomb. After going ahead just shy of the half hour mark with a brilliant goal by Craig Spooner, the Wansbeck outfit had to show all of their fighting qualities. Consett drew level through James Metcalfe, edged in front through an own goal and after a leveller from Luke Salmon, when ex Collier Dale Pearson made it 3-2 to the Durham side with ten minutes remaining it appeared that Ashington were going to be on the end of a hard luck story.

But the Colliers – who left every ounce of energy on the pitch – simply refused to give up and when Anderson tucked the ball into the net with four minutes of normal time remaining, it sent the home contingent into raptures.

On a pitch looking in pristine condition, it was the visitors who threatened first. Within a minute, they were awarded a free kick 20 yards out and a curling effort from Luke Carr flashed wide of home ‘keeper Adam McHugh’s left hand post.

Then in the seventh minute a ball down the channel sent Pearson through but a superb block tackle by Curtis Coppen resulted in a corner from which Calvin Smith headed over.

Two minutes later, Ashington created their first opening. The adventurous Salmon advanced towards the penalty area and when he squared the ball across, Max Cowburn’s right footer was tipped away by Kyle Hayes.

Hayes was called into the action later when he clutched a free kick from Cowburn from just outside the area then midway through the period, Karl Ross found Salmon on the right and when the midfielder cut inside, his shot was shovelled away by Hayes.

Ashington continued to press. A throw in by Ben Sampson ran kindly for Ross in the area but his missed his kick at the vital second which allowed Consett to clear.

But after knocking on the door, the Colliers eventually broke the deadlock.

On 26 minutes, Jordan Summerly ventured forward and after playing the ball to Adam Johnson, the debutant set up Cowburn whose effort hit the top of the crossbar and went over.

And two minutes later, Johnson was involved in the construction of the opener. He laid the ball off for Cowburn whose precision first time cross was magnificently headed inside the far corner by Spooner from six yards.

The Ashington crowd went wild but after Coppen had produced another brilliant tackle in the box to halt Colin Larkin, they were silenced ten minutes later when James Metcalfe equalised.

A header by Arjun Purewal came back off the post and McHugh made an outstanding save to deny the Consett skipper from the rebound, pushing the ball around for a corner on the left.

When the ball came into the box, Ashington had opportunities to clear and they were punished as Metcalfe drove inside the post from the edge of the area.

It prompted an instant response. An Anderson corner on the left was headed wide at the far post by Coppen then Salmon – who was initially blocked – picked up the rebound but stabbed just wide.

The final action saw Ross play the ball through for Spooner but a defender got back to thwart him.

Ashington were caught cold at the start of the second half as within two minutes, the Steelmen took a 2-1 lead.

Consett broke quickly down the right and when Jake Orrell played the ball across the six yards box, it was deflected into his own net by Coppen.

Ashington’s response was positive. Hayes held an effort from Spooner; Cowburn had a 22 yards free-kick tipped over by the visiting ‘keeper and from the resulting corner, a header from Harmison was touched wide.

Still they took the game to the leaders and after Cowburn had shanked an effort well wide, got the equaliser on the hour through Salmon.

A corner on the right by Ross was retrieved by Harmison who hooked into the danger zone for Salmon to net with a spectacular bicycle kick.

However in the next minute, the Colliers were almost caught out when Orrell exploited space but drove wide from 22 yards.

The intensity of the game was breathtaking with the action non stop as both sides went for the jugular.

And on the 65 minutes mark, Johnson – who certainly impressed on his first appearance following his move from neighbours Blyth Town – had a great opportunity when he was released through the middle with a one on one.

He bore down on goal but his low drive was tipped away by Hayes, who showed lightening reactions to tip the ball away with Johnson looking to poke home the rebound.

Salmon fired just over following a one-two with Johnson before the visitors went into a 3-2 lead.

Substitute Darren Holden – who had replaced Larkin for the start of the second half –crossed to the far post and Pearson steered home.

Skinner threw on late substitutions including Yannick Aziakonou and seconds after his introduction, he was involved as he switched the ball out wide left to Salmon and when he crossed, Anderson tucked home at the far post.

Still the relentless action continued right until the end. Johnson tried an audacious 40 yarder after a clearance from Hayes fell to him with the ‘keeper outside of the area but his effort was weak then when play switched to the other end, Consett had a penalty shout turned down by referee Darren Williams.

Then came the final whistle – and afterwards players, officials and supporters could reflect on a game which wasn’t only a credit to the league but to football in general

Before kick-off, an impeccable minutes silence was observed for Armistice Day. 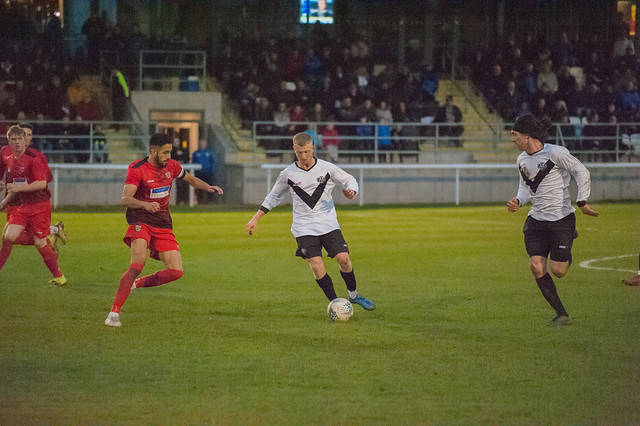