Billingham tested Ashington’s resolve at a blustery dwmedia stadium on Saturday – but once the Colliers had cracked the code they went on to rack up a comprehensive victory.

And for the fifth time Ian Skinner’s side scored four goals in a game on home turf this season – the others on the receiving end being West Auckland, Whickham, Crook Town, and Sunderland RCA.

With the four teams above them in the first division of the Ebac Northern League all winning, the Wansbeck outfit remain in fifth place and are the third highest scorers in the table behind West Auckland and leaders Consett.

Both sides went into the contest buoyed by midweek performances. The Colliers claimed a superb 4-2 victory over Newton Aycliffe whilst Billingham earned a 1-1 draw against Consett.

Patience was one of the key words to emerge from Saturday’s win as in a first half where chances were few and far between, Ashington didn’t force the issue against a well organised Town side well marshalled at the back by Lexus Breeden who is on loan from Darlington.

The visitors were quickly out of the blocks and in the second minute, a quick break saw Daniel Boyle shoot wide from 20 yards.
Ashington hit back and from a cross by Ben Sampson, skipper Dean Briggs – playing his last match before he emigrates to Dubai – hit a volley into the ground at the far post which was headed clear.

Town then had a spell where a header from captain Danny Earl struck the angle of post and crossbar after a cross by Oliver Cann then home stopper Adam McHugh had to be alert to push around a 25 yarder from Boyle.

Inside a ten minutes spell, Earl and Harry Close both had goals ruled out for offside whilst the home outfit were guilty of being careless with their passing before Craig Spooner fired over from distance.

The final opening came five minutes from the break when an effort from Earl was palmed away by McHugh.

Ashington upped the tempo after the break and cranked up the pressure on the visitors goal.

In the 57th minute, Liam Doyle, receiving from Damen Mullen, was through but hit the side netting as ‘keeper Jack Norton advanced then a lovely intricate move involving Jordan Summerly, Paul Robinson, Briggs and Sampson saw Briggs blocked and Robinson side foot wide.

On the hour, Briggs produced another surging run but his effort was repelled by Norton then Spooner – bursting through from his own half – glided past three defenders and laid the ball off for Doyle whose drive was pushed over by Norton.

However midway through the period, Ashington broke the deadlock. Robinson and Summerly combined down the left and when the latter put the ball into the box, Mullen nodded it back across for Spooner who headed in at the far post.

Two minutes later, Sampson found Spooner but Beeden got back to snuff out the danger then Briggs set up Spooner who stabbed the ball wide.

It was all Ashington and in the 70th minute, Briggs netted his 15th goal of the campaign.

Doyle was sent springing through and the midfielder unselfishly squared the ball for Briggs who side footed home.

In a rare raid, Boyle set up a volley for himself but lashed narrowly over from the edge of the area before a magnificent move culminated in Ashington’s third on 78 minutes.

Karl Ross had replaced Mullen and three minutes later, he played a one-two with Spooner then fired home right footed from 14 yards.

In the 90th minute goal number four arrived when Doyle again burst down the right and when he drove the ball across, Beeden could only steer it into his own net.

Briggs almost had the final say but his shot was held by Norton. 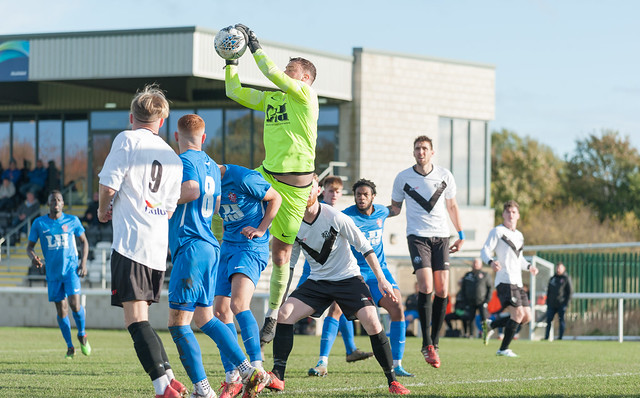