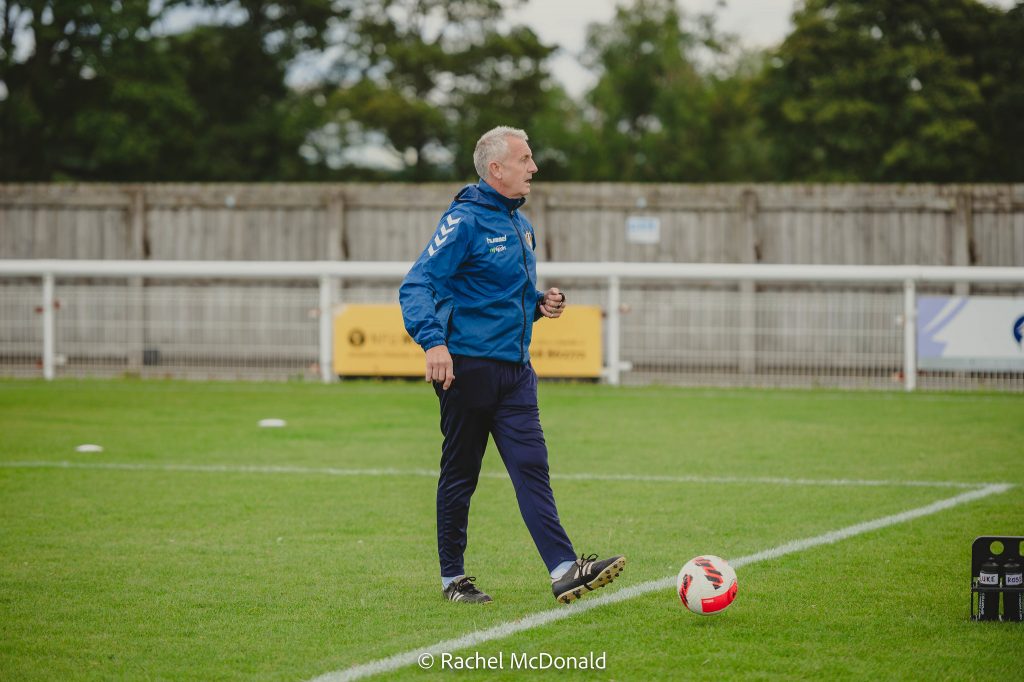 Ashington FC coach Neil Cooper was naturally ecstatic after the Colliers had marched into the fourth qualifying round of this season Emirates FA Cup with a 3-0 win over Northern Premier League East Division outfit Stocksbridge Park Steels on Tuesday night.

Two goals in the first eight minutes from Yannick Aziakonou and Paul Robinson gave the Wansbeck side – playing in front of a record attendance of 1424 at Woodhorn Lane – a great start with Ben Sampson adding a third ten minutes into the second half.

With manager Ian Skinner unavailable, Cooper, Lee Anderson and Robbie Dale were in charge of the side.

Cooper said afterwards: “We thoroughly deserved it and I’m thrilled to bits. All of the players including those lads on the bench were a credit to the club – they were absolutely class. To be 2-0 up after ten minutes was unbelievable. I thought for the first 20-25 minutes that we were the better team but we sat back a bit too much and allowed them (Stocksbridge) to get into the game. Since our shock exit against Billingham Town in the Isuzu FA Vase, we have only shipped a few goals and tonight, the lads got in the way of shots and blocked crosses as we had asked them to do before the start. We knew we conceded from crosses in the first game at Stocksbridge so we had to get out to them – and we did that.”

He continued: “At half time, we asked the players to get back to controlling the game but for some reason at the start of the second half we came out slowly. My first thought is to play forward but we were going sideways too much which allowed them (Stocksbridge) to come onto us. To be fair, our ‘keeper Karl Dryden has made a couple of brilliant saves at 2-0 then Ben Sampson’s goal came at the right time for us.”

Cooper could hardly conceal his overall emotions: “I’m not wanting to appear to be greedy but we could have scored a fourth or fifth goal especially through Dean Briggs who near the end, made a brilliant run and his shot was just off target. However, we’re through and that’s all that matters. Would we have even thought about being in the fourth qualifying round let alone be planning to go down and face Kings’s Lynn – no! It’ll be a very hard and tough game but we’ll look forward to it and why not! From a different angle, we are one game away from reaching the first round proper and that’s an unbelievable thought for this club. Everyone starting from the chairman has played their part and are pulling in the right direction. That’s brilliant – but tonight was class.”

Cooper added: “Lee Anderson and Robbie Dale (who was ruled out through injury but who stepped up into a coaching role) were spot on too with Robbie saying things on the touchline at the right times and I can’t praise him enough.”

Meanwhile fellow coach Lee Anderson said: “I’d just like to thank all the fans for coming out and backing the team. Also thanks to Neil Cooper and Robbie Dale and all the players for their efforts. Their attitudes were absolutely first class and it was a great night for everybody involved with the club following what was a good and well deserved win.”