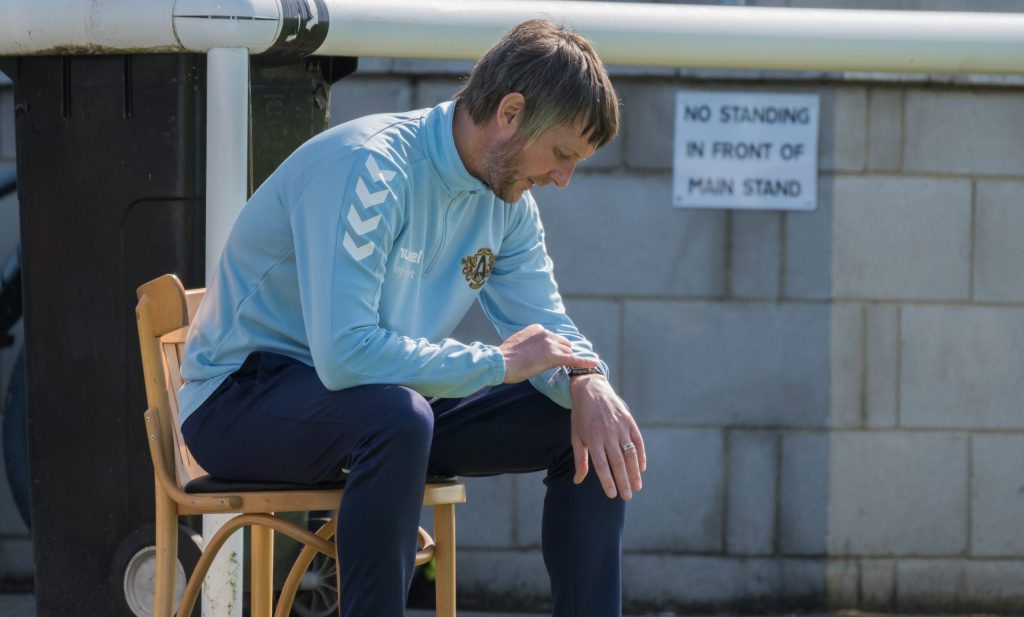 Ashington FC manager Ian Skinner was naturally disappointed after his side had gone out of the Isuzu FA Vase following a 6-4 home defeat at the hands of Billingham Town on Saturday.

In one of the most unbelievable of games ever staged at Woodhorn Lane, the home side led on two occasions at 1-0 and 4-3 before the plucky visitors came back to equalise then score twice in the final quarter hour.

Skinner said: “First of all congratulations to Billingham Town. From a personal perspective if there’s a crumb of comfort to take from today, I hope the late Gary Pearson wherever he may be – who had been appointed as the Billingham manager before his sudden passing – has got a smile on his face knowing that his Billingham Town team have come to Ashington and won 6-4 because I got on well with Gary and my condolences go to his family.”

The boss was not happy from the kick off: “I wasn’t particularly pleased with how we began the game,” he added, “In the first ten seconds, we made about three passes which were really slow, really sloppy and really under hit and that set the tone for the start of the game but then after four minutes we found ourselves one nil up and you think ‘hopefully that will settle us down and we’ll go on to have a better performance.’ To Billingham’s credit they came back at us and to be fair I don’t know if there were any defences on the pitch in the first half because it ended up 4-3 at half time! However, one of the key moments for me was right on the interval where again following a good little move, we got Robbie Dale in and the ‘keeper (Jordan Harkess) has made a good save. If we had come in at half time 5-3, it might have been a different tale – but it wasn’t to be. There were lots of things that the players – as well as myself – weren’t happy with but again second half we never really got going to the fluent levels which we know we can. Most teams who have come here this season have sat in – but they didn’t choosing instead to defend deep with a low block. They (Billingham) always looked a threat if I’m honest on the counter attack and overall, you’re thinking ‘we’ve scored four, we’ve had a couple of scrambles in the box second half, hit the bar twice and we’ve lost 6-4!’ When you look back and examine things, we’ve conceded from a corner allowing Ben Riding a free header then we’ve conceded after another free header from a long throw in by Riding where Jack Pounder has scored – and again we identified Jack (Pounder) as somebody who airily is very strong.”

He continued: “Maybes you wonder ‘was it meant not to be our day?’ I think when they went 5-4 up, it’s a strike where everybody thinks it’s going wide and it cannons off the inside of the post and flies into the other side of the net – and even the lad who struck it (Ben Heeley) didn’t even realise it had gone in! We can look back on hundred of things but what we can’t do is change the result so we wish Billingham Town all the best for the rest of the competition.”

Skinner went on: “I said earlier in the season that we needed to be careful in terms of the goals we were conceding and about turning situations around – like coming from 2-0 down to win 3-2 . At the time it was great but I mentioned that there would come a point where it wouldn’t happen and unfortunately we chose the wrong day – and probably one of the worst days – for that to occur. But we have to dust ourselves down and go again and channel a bit of our disappointment about how we feel and use that to really spur us on in the other competitions we are still in. However, what we will certainly have to do is be better when we travel to face Carlisle City on Tuesday night and it’s time for the players to show a positive reaction. It’s nice that we have a game so quickly at Carlisle and nice that we’ve got another cup game at Ashton on Saturday against opposition who operate two leagues higher than us. Defensively, we‘ve had some issues this season in terms of injuries and unavailability – but that’s not an excuse and I don’t want to take anything away from Billingham because if you score six goals away from home, I think you deserve to win a game of football.”