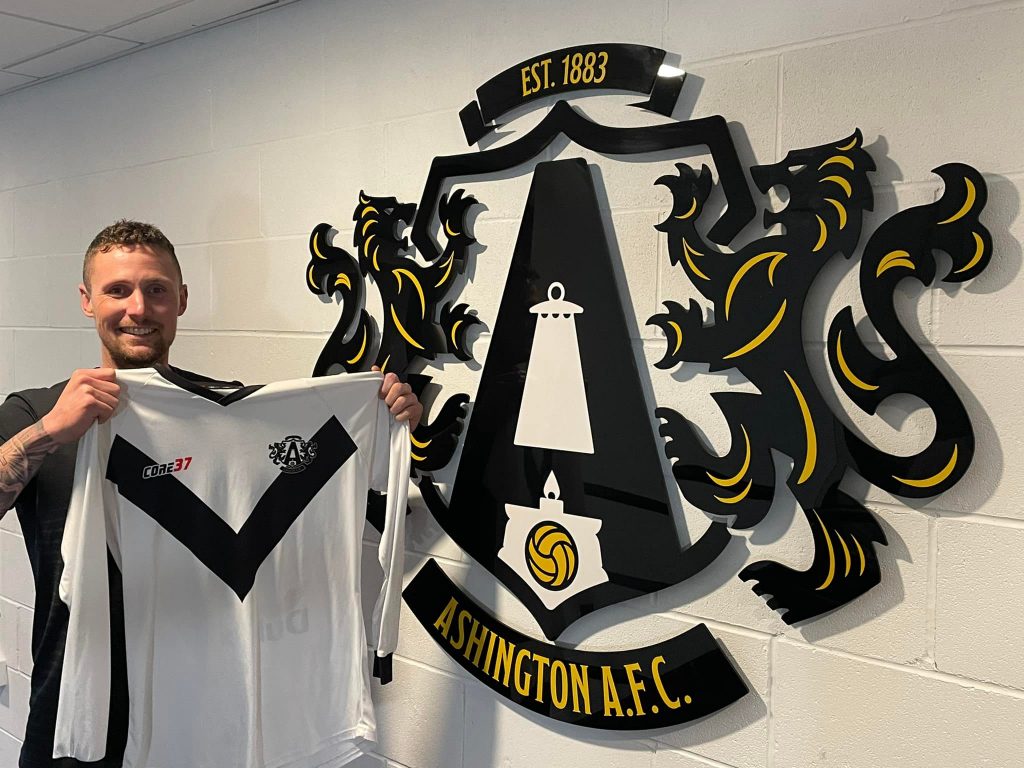 Darren Lough says he is delighted to return to his hometown club Ashington – bridging a gap of ten years since he last played for the Colliers.

Two years ago, the Morpeth-based defender – a drainage engineer – was in the Hebburn Town team when they visited Woodhorn Lane for a midweek Ebac Northern League first division clash and was impressed by what he saw: “First and foremost, I’m over the moon to have signed for Ashington again,” he said, “The last time I played at the ground was for Hebburn a couple of years ago and I remember walking through the main door of the new stand and seeing parts of the club’s history on the walls and thinking ‘this is really professional.’ As a player, playing at a decent ground with a good pitch gives you a feel-good factor and makes you want to play.”

Lough – a former captain for Newcastle United Reserves – first played at Woodhorn Lane between 2010-2012 before going to Iceland where he served two clubs – KA Akureyri and IA Akranes. He then had very successful spells with South Shields and latterly Hebburn where he won the FA Vase as well as promotion with both clubs.

However. the 32 year old – who has a young family – revealed that it was the extra traveling involved which was behind his reason to leave Hebburn: “A couple of clubs in the League above came in for me,” he added, “but again the distances of the journeys would have been an issue because it would have taken up too much time. When I heard of Ashington’s interest, I knew that’s where I wanted to play. They won the Division One cup last season and I was impressed with how they performed, finishing eighth in the table.”

Lough was completely upfront – and similarly upbeat – about what targets the Woodhorn Lane based outfit should be setting themselves next season: “Obviously the club have got the potential to go places,” he said, “They have signed experienced players to go alongside the younger lads to help push the club onto the next level. There is a good variety of experience in different positions and hopefully the newcomers will all gel with the existing squad. Our target should be to win the league because nobody remembers who finishes second in the division – whilst it would be great to have runs in the various cup competitions as well as the FA Vase.”

Manager Ian Skinner said: “Darren is somebody who I have known for a long time. I coached him when he was a young player was he was attached to Newcastle and I was involved there and I have followed his career. He’s obviously been at Ashington before and people might not remember what a good player he was because he probably gets most well remembered when he fractured his skull in a match at Woodhorn Lane – and it’s fantastic that he got over such a horrific injury. He went to Iceland to play then came back from abroad and had a very good career after going to South Shields and Hebburn.”

He continued: “Lots of people I have spoke to who enjoyed watching Ashington last year said we might have been a little bit young and naïve – and Darren will bring great leadership qualities both on and off the pitch. He is slightly versatile – he can play in a number of positions which is great in the modern game and I see him being a big player for the football club anywhere across that defensive back line which is where he is most comfortable.” He went on: “I’m delighted that I’ve finally landed Darren – a player who I have chased on numerous occasions. I came very, very close to signing him just before last season began but he felt Hebburn was his best option having won the league with them and obviously there was a win for him in the FA Vase final which was carried over from Covid. However, given that he’s got a young family, Darren maybes felt now was the time to drop back into the Northern League. All of a sudden we have got vast experience added to our squad because the players I have brought in have made multiple appearances further up the footballing pyramid and that can only help what is already a very good, young and developing squad here at Ashington.”