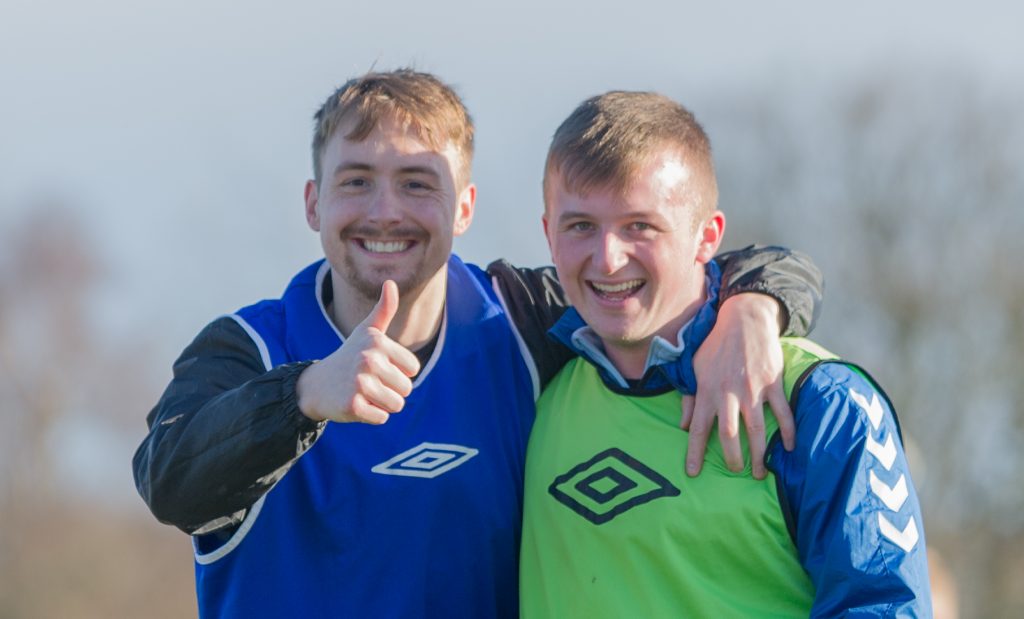 Thomas Kalthoeber played a significant role on Saturday as he was involved in both goals as Ashington came from behind to win 2-1 win against Bishop Auckland at Woodhorn Lane.

And afterwards, the 20 year old defender – who slotted in on the right hand side of the back four – revealed that although he was delighted to earn a recall to the side, it nevertheless came completely out of the blue.

“I was pleased to get back into the team – but I wasn’t expecting to return at full back,” said Kalthoeber who had a spell with Percy Main Amateurs – members of the Northern Alliance League – earlier in the season, “I hadn’t played in that position (full back) since I was at Ashington last term and to be honest I thought I would be on the bench.”

Newcastle-born Kalthoeber was heavily involved in the action and described his involvement in the two goals: “They (Bishop Auckland) kept utilising the other flank which allowed me to have a lot of space on my side – so I kept driving forward to try and beat my marker and to create things,” he said, “For the equaliser, I took a throw in which went over the head of the centre half and Adam Johnson has spun his marker and crossed for Bobby (Taylor) to nip in and score. A few minutes later, I got the ball out wide. I drove forward against the left back, cut inside and played it (the ball) with the outside of the boot to Lewis (Suddick) who applied a really good finish for what turned out to be the winner. I was really happy with the result especially after we lost when we should have won at Whickham the previous week in horrible conditions.”

Kalthoeber – who is based in Longbenton – is hoping to get the nod for the away game against Newcastle Benfield at Sam Smiths Park on Saturday (February 26) but knows there is competition for places: “I got my opportunity and hope I did enough to keep the shirt – but I’ll just have to wait and see,” he added. Ashington FC boss Ian Skinner said: “Thomas (Kalthoeber) played really well today. The only reason we took him off with 20 minutes to go was because he was getting into great positions and covering a lot of ground down the right hand side but he took a couple of heavy knocks and just seemed to be tiring a little bit. We were getting lots of space and lots of opportunities to attack Bishop Auckland down that side and we thought a fresh pair of legs might help. As it happened when we changed, they (Bishop Auckland) altered their shape a little bit and ended up with two players in the wide area because they tried to play 3-5-2 which meant we could play two versus one against them (in wide areas). Then they changed to a 4-3-3 so they had two players in the wide areas which made it a bit more difficult for Liam Doyle (who had replaced Thomas) to get out. However, Thomas should be really, really pleased with his performance. He played a couple of games at centre back for us after coming back from Percy Main and performed really well and was probably a bit unlucky to drop out of the side when Curtis Coppen came back in. Today I asked him (Thomas) to play right back which he’s no stranger too as he’s played a number of games there before.”