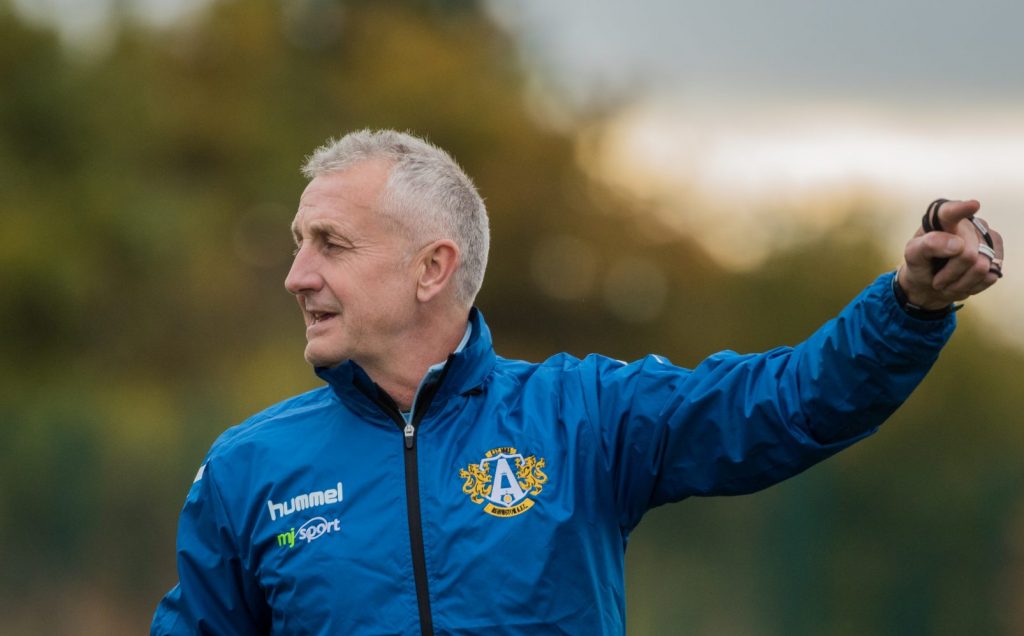 Ashington FC’s Neil Cooper was clearly delighted after the Colliers had hit Whitley Bay for six on Saturday.

And after the 6-1 away victory, the first team coach revealed that the key factor behind the success was how the players executed the game plan to perfection.

Cooper said: “Following the defeat at Crook Town, the main thing we worked on at our training session in midweek was to get that out of possession narrow; get the ball pressed and stay narrow out of possession; win the ball back and put them under pressure. We had to be wary as to how Whitley Bay were going to react coming into the game off the back of a heavy defeat (8-0 against Newton Aycliffe) especially when they got the early goal today and were they going to push on. However, when Josh Gilchrist put them in front, we were so much on top and it was a case of us keeping the pressure on and to keep going – and the lads did exactly as we asked of them carrying out the game plan to perfection.”

Stakeford-born Cooper continued: “At the start of the match, their ‘keeper (Dan Lister) has made a save from Craig Spooner in the very first minute. We went a goal behind – the lads wondered if it was offside – but it was nevertheless a soft one to concede. Even then they kept to the game plan really well. In the Crook Town game which we lost 4-0, the players did well when in possession; we hit the woodwork four times and the Crook ‘keeper has made saves but out of possession we were very poor all over the pitch. So we said to the lads today ‘we need to get into Whitley’s faces; we need to press the ball and we need to keep working hard out of possession which I thought they did. They worked as a team pressing and they backed each other up all over the pitch and got the benefit of what they did. You look at the saves which Dan Lister has made for Whitley Bay and at 1-0 (to them) and even when we were 2-1 ahead, he’s kept them in the game.”

He went on: “I wasn’t too disappointed going in with a 2-1 lead at half time. Whitley Bay have scored and blazed one over the bar but our ‘keeper Karl Dryden hasn’t had a save to make. You just haven’t got to panic and to make sure you score the next goal because it’s important and you don’t want the opposition to get their heads up. You know they (Whitley Bay) are going to come out the first ten minutes in front of their home crowd and are going to press you and they are going to work and from our angle we had to be big and strong. It was unfortunate for Whitley Bay after their midweek loss but we knew they would want to come out and get at us so we knew we had to do things right. We also believed that if we scored a third, we would go on to score a few more.”

Cooper – a retired fireman – who was previously reserve team manager at Whitley Bay for a period of four years, linked up with the Colliers via neighbours Bedlington Terriers: “I’ve been at Ashington for three months now and I’m settling in,” he added, “Ian Skinner is very much a hands-on manager but I’m getting more time to coach on the pitch at training sessions and also being involved on match days. I’m thoroughly enjoying it – it’s brilliant.”