Ashington’s dreams of bridging a gap of over 60 years in their FA Cup history were shattered on Saturday after they went down 3-1 against high flying King’s Lynn in their fourth qualifying round tie in Norfolk.

However there has been so much to admire about Ian Skinner’s side throughout this epic run which all began in early August with a thrilling 3-2 win over Newton Aycliffe at Woodhorn Lane.

In the last three rounds, the Wansbeck outfit have knocked out Ashton United, Bradford Park Avenue and Stocksbridge Park Steels – higher clubs in the non league footballing pyramid – and on Saturday, although the Colliers came up short against a side who are top of the National League North, they nevertheless left The Walks Stadium with their heads held high.

Afterwards King’s Lynn boss Tommy Widdrington showered praise on Skinner and his side – and deservedly so – after they had left everything out on the pitch.

It was a typical cup tie with flowing football at a premium but after Ben Stephens had given the home side the lead, plucky Ashington responded quickly and levelled through Luke Salmon.

Jordan Ponticelli’s fine volley restored the lead for the Linnets and when Adam Crowther swept the ball home twelve minutes from time, the goal effectively booked their passage into the first round proper.

In the fourth minute, Dan Maguire slipped the ball through for Lee Mason but his effort drifted wide of ‘keeper Paul Jones’s right hand post.

King’s Lynn made a swift counter attack and Joshua Barrett’s shot towards the near post forced ‘keeper Karl Dryden to save with his legs.

Barrett had an identical opportunity on the 12 minutes mark and the outcome was the same too, with Dryden keeping the ball out.

However on the quarter hour the home side went ahead when a side footed shot by Stephens from 14 yards, squirmed under Dryden’s body and went into the bottom corner of the net.

The Colliers hit back with Yannick Aziakonou having a shot from 20 yards charged down before the visitors drew level following a slick incisive move.

Dean Briggs placed the ball through for Salmon who coolly slotted wide of Jones and inside the far corner.

But Ashington’s joy was short-lived as only four minutes later, they were behind for a second time.

The finish from Ponticelli was top drawer as he took the ball down and volleyed wide of Dryden and inside the far post as Ashington looked towards the assistant for an offside flag which never came.

On the half hour, a snap shot by Barrett smacked against the post with Dryden rooted to the spot then the stopper fisted out an effort by Gold Omotayo.

Ashington – once again spurred on by a noisy following of over 150 supporters – came close on 36 minutes when Briggs darted into the box but shot just wide.

At the start of the second half, Mason fired narrowly over from 22 yards after a Maguire lay off and the Colliers were the better side in the opening 20 minutes.

Salmon won an aerial duel to head on for Ben Sampson but his shot was held by Jones then a clever pass by Maguire set up Sampson who was again denied by the home ’keeper.

With 20 minutes remaining, Dryden kept Ashington in the game. He thwarted Michael Clunan when he was clean through on the right but in the 78th minute, King’s Lynn broke Ashington hearts when Crowther struck a decisive third.

A free kick by Aaron Jones to the far post was headed back by substitute Joshua Coulson for Crowther who fired in.

Ashington kept going until the end – but the final whistle saw them bow out of the competition.

However, Colliers fans applauded their side who in return came over – along with the management team – to the section of the stand where the majority of their supporters were housed to show their appreciation amid emotional scenes. 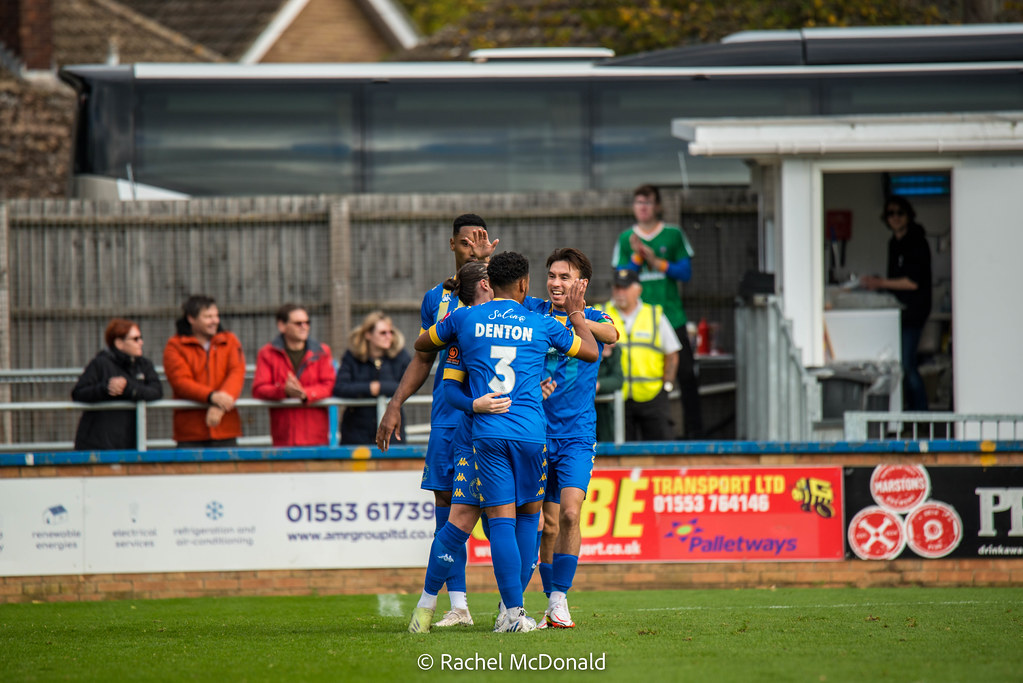