Ashington’s uncanny knack of bouncing back after a disappointment came to the fore again at Hillheads on Saturday.

The Colliers went into the clash against Whitley Bay after being on the wrong end of a 4-0 scoreline at Crook a fortnight earlier but in dramatic style they swept the Seahorses aside with a powerful and dominant display which saw them run out winners by a convincing 6-1 margin.

What’s more in a contest where they had 25 attempts at goal, Ian Skinner’s outfit could have hit double figures – with home ‘keeper Dan Lister sparing his sides blushes of an even heavier defeat and was their man of the match by a considerable distance.

For the Wansbeck side, there were braces for debutant Jordan Lashley and recent newcomer Adam Johnson whilst Bobby Taylor – on his return to the starting line up – began the rout and Craig Spooner finished the display off with a spectacular effort minutes only minutes from the end.

Ashington were all pumped up from kick-off and the game was only 16 seconds old when Lister’s busy afternoon commenced.

A long ball from Ashington skipper Ben Harmison found Spooner whose lob from the edge of the area was tipped over by the young stopper.

In the third minute, a good move saw Taylor and Jordan Summerly combine on the left and it took another good stop by Lister at the foot of his post to deny the full-back as he pushed the ball away for a corner.

However, two minutes later – and against the run of play – the Seahorses took a shock lead.

Malcolm Morien slipped the ball through for Josh Gilchrist who steered a precise effort wide of ‘keeper Karl Dryden and just inside the post.

Undeterred, the Wansbeck side responded with Lister keeping out efforts from Taylor, Johnson and Lashley whilst Spooner skied over when well placed.

Despite Ashington’s total dominance, the Bay could so easily have doubled their advantage in the 19th minute when after the ball ping-ponged inside the box, Jamie Dunn dragged his shot narrowly wide of Dryden’s left hand post.

The visitors kept up the pressure and after Johnson had fired over, it came as no surprise when they drew level on the half hour.

Spooner found Taylor and the winger cut inside then unleashed a right footer from 25 yards which swerved in mid air and although Lister got his hand to it, he could only help the ball into the top corner.

Within a minute, the Colliers could have gone in front as Ben Sampson found Johnson but he curled his shot around Lister and past the upright.

Morien lashed over for Whitley before the Colliers went 2-1 up in the 37th minute with a goal from Lashley.

The ex Bedlington Terriers forward played a one-two with Liam Doyle then had time to pick his spot wide of Lister.

Right on the stroke of half time, Yannick Aziakonou made a great block to deny Gilchrist but Ashington nevertheless went in at the interval holding a slender 2-1 lead.

The Colliers made an identical start to proceedings after the break as they had done from the very first whistle when Lashley reached the by-line but his shot was turned around by Lister.

Dunn blasted over following a corner then at the other end Lister denied Doyle before Ashington widened the margin in the 54th minute.

Sampson – prominent in the midfield with an energetic display on a heavy pitch – won possession to slot the ball through for Lashley who advanced before firing wide of Lister.

On the hour, a free-kick by Johnson saw Curtis Coppen head over but three minutes later, Johnson scored his first goal for the Colliers as he met a cross from the impressive Spooner to lash in.

Seconds later, Lister repelled an effort from Doyle then at the other end, Dryden tipped over from Michael Speed.

The chances continued to stack up for the Colliers – Aziakonou and Doyle both going close before with ten minutes remaining, the latter found Johnson who fired under Lister for the fifth.

However, the best was still to come as in the 86th minute, Spooner put the icing on the cake with undoubtedly the goal of the game.

Lashley laid the ball off and Spooner did the rest – arrowing an unstoppable drive from the left which screamed into the top corner.

It was Ashington’s most convincing performance of the season and – without a game on Saturday (December 11) – they now prepare to face Newcastle United under 23’s in the quarter final of the Techflow Marine Northumberland Senior Cup at The dwmedia Stadium on Tuesday (December 14) where kick-off is 7.30pm. 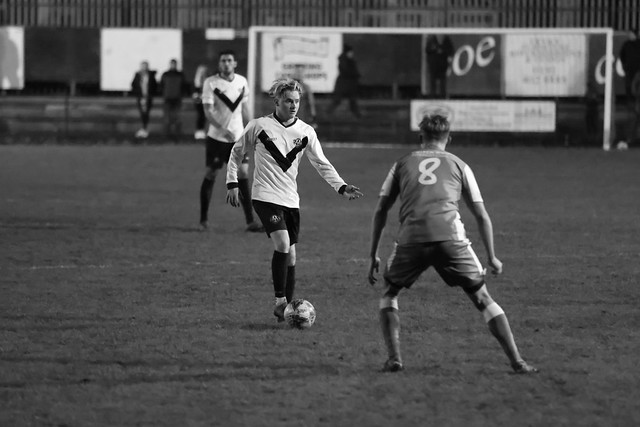