It was a momentous day after all – the day where supporters were allowed to watch their local football side from the stands and terraces for the first time after the sport was suspended in March following the outbreak of Covid-19. And Ashington’s revamped squad gave their fans in a capacity crowd of 150 – as per government guidelines – something to remember with a deserved victory over New Mills at Woodhorn Lane.

Rapidly approaching ten years since the Colliers chalked up a 4-2 success when the two sides last met in the third round proper of the FA Vase down in Derbyshire, there was a solo effort goal to savour on that day from Ashington striker Phill Bell. Similarly on Saturday, supporters from NE63 went home talking about two stunning free kicks from Max Cowburn and a speciality effort from Dean Briggs - two of the new signings brought into the squad this summer by manager Ian Skinner.

The Wansbeck side were out of the traps like greased lightening and incredibly manufactured four clear cut chances within the first ten minutes. The first came when Lee Scott volleyed a deep cross from Briggs wide at the far post and barely 60 seconds later it was Ben Sampson who swung the ball over where Scott’s goalbound header was superbly tipped around at the foot of the post by ‘keeper Dylan Forth.

Minutes later the stopper palmed the ball away from a shot by Briggs who had latched onto a sweeping pass from the back by Curtis Coppen then Coppen - accepting the ball from David Luke - saw his effort thud against the crossbar with Forth beaten. However when play immediately switched to the other end, home ‘keeper Adam McHugh was forced to push the ball to safety from Adam Gardiner.

After a lull in the game, McHugh denied Josh Ramsden before the Colliers went in front following a superb four man move. Sampson and Luke were initially involved and when the latter played the ball across, a neat dummy by Scott opened the door for Briggs who advanced before finishing with aplomb, hammering a left footer from 12 yards high into the net past Forth.

And just past the half hour mark, Scott added the second after netting from the same distance. The centre forward turned on a sixpence just inside the area which bamboozled defender Adam Muir who brought him down. Benton-based referee Darren Williams pointed to the spot and Scott made no mistake, sending Forth the wrong way from the penalty.

With half time just around the corner, Jack Butler went on a mazy run cutting inside but fired wide. Both sides made changes at the break with the Millers – who operate in the North West Counties League Division One South - making an instant impression and having a glut of opportunities. Within 30 seconds, Mike Norton glanced across goal; Luke deflected a goalbound effort over the bar; Elliot Cook fired over from 20 yards then Ben Edgson tried his luck from long range which had McHugh scampering across his goal before the ball rolled wide.

Scott had a tame effort fielded by Forth then on the hour McHugh blocked from Jake Pollard. And in the 63rd minute, it came as no surprise when Edgson clipped home a low free-kick by Cook to reduce the deficit.

Minutes later, a pile driver from Pollard was pushed out by McHugh – before Cowburn gave the Colliers some breathing space with quarter of an hour remaining. Max Emmerson was hauled down 25 yards out and from the restart, Cowburn bent a superb effort around the wall and inside the near post.

Three minutes from time, Butler was tugged back and from a similar range, Cowburn found the opposite corner with another brilliantly executed free kick. 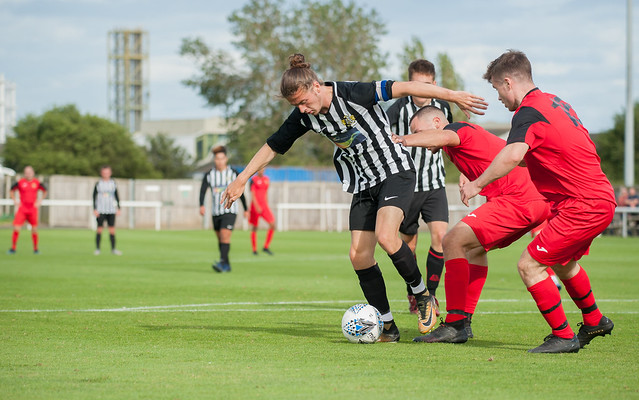