Consett secured three more precious points in their bid for promotion with victory over Ashington at a chilly Belle View Stadium on Saturday.

A trio of goals in the first half from Nicky Allen, Matty Slocombe and Luke Carr effectively put the game out of sight whilst being extremely harsh on the Colliers. After trailing to Allen’s early strike, the Wansbeck outfit grew into the match and were indeed the better side until Slocombe doubled Consett’s lead.

Carr’s thunderbolt just prior to the half time interval merely rubbed salt into sore wounds. Fresh from their deserved draw against West Auckland the previous week, Ashington manager Ian Skinner was forced to make two changes with Dom Price and Kieran Brannen coming into the side for Callum Johnston and Jamie Hanson.

The visitors had been so solid against West – but on Saturday found themselves trailing after only four minutes when Allen met a cross from the right. He brought the ball down with his left foot then struck a first timer with his right which gave ‘keeper Adam McHugh no chance.

Ashington’s first sniff of an opening came on the quarter hour mark when David Edwards and Price combined to send Thomas Kalthoeber through but his blistering effort was saved at the post by the feet of home ‘keeper Kyle Hayes. The Colliers continued to press forward and carved out a glorious opportunity in the 32nd minute. Edwards won a midfield contest and slotted the ball through for Brannen who advanced to the edge of the area but dragged his shot inches wide of the upright with Hayes rooted to the spot. That proved to be a pivotal turning point as two minutes later, the Steelmen added a second. Ross Wilkinson had foiled Brandon Slater with the home defender conceding a corner but Ashington lost possession from the flag kick and in a swift counter, Slocombe neatly lobbed over McHugh.

The Colliers retaliated and a cross from Kalthoeber was fisted out by Hayes. Allen hit the side netting before the Colliers were undone again in the dying embers of the period with Carr unleashing a tremendous left foot strike from 30 yards which left McHugh grasping thin air. Ashington began the second half in spirited fashion with Slater whipping the ball across the face of the Consett six yards box and an effort from fully 40 yards by Edwards being comfortably dealt with by Hayes.

Chances - which had been limited in the first period – were even more remote and it was the 69th minute for the next piece of goalmouth action as Ben Gaffney’s swerling and dipping cross-cum-shot from the left forced Hayes to tip over in fine style. However with quarter of an hour remaining, Consett got a fourth when the unmarked Calvin Smith headed powerfully into the roof of the net from a right sided corner. But three minutes later, plucky Ashington at least got a consolation which their play had warranted. Curtis Coppen found Gaffney down the left and his cross was turned home by substitute Lee Scott. Then in the 81st minute, Price slipped the ball through for Scott whose shot was parried away by Hayes.

With thanks to Will Matthers 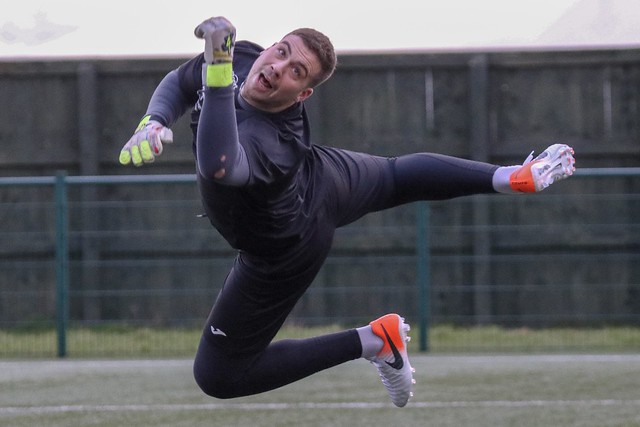