A late goal by Guisborough Town’s Josh Rowbotham denied Ashington a deserved share of the spoils – and a first away point of the season - at the KGV ground on Saturday.

Rowbotham swept the ball home in the 80th minute following a free kick on the right which culminated in Ian Skinner’s side leaving Teeside empty handed. The defeat also brought Ashington’s three match unbeaten run in the league - including back to back wins over North Shields and Newcastle Benfield - to an end. In what was the proverbial game of two halves, the Wansbeck side – without the services of their influential skipper Curtis Coppen who was sidelined through injury - were fortunate to be level at the half way mark with Guisborough, who are enjoying a good run of form this term, dominating for the entire first period. They went ahead in the 12th minute when a pinpoint cross from the left flank saw Sonni Coleman head the ball wide of ‘keeper Adam McHugh and they should have doubled their lead only four minutes later when Danny Earl whipped the ball over from the right but skipper Mark Robinson fired well wide. John Howard went close on the half hour before the Colliers levelled out of the blue on 34 minutes. Karl Ross found Dylan Williamson down the right and when he crossed low towards the near post, Dan Taggart slipped the ball under the body of ‘keeper Ryan Catterick from six yards. With only seconds of the half remaining, Gavin Caines cleared off the line from a right sided corner and the half time whistle came as a welcome relief for the visitors. However, Ashington came out of the dressing room a different outfit and looked particularly threatening on the break. Early doors, Williamson nodded wide from a Thomas Kalthoeber cross and a cross-cum-shot from Williamson drifted narrowly over after the winger had received from substitute Danny Anderson. Sandwiched in-between, Coleman headed wide before sub Steven Roberts was allowed time and space to advance then shoot narrowly wide from distance. Midway through, Lewis Robson played the ball forward to release Taggart but the forward failed to connect cleanly and his effort was repelled by Catterick. After Rowbotham had restored Guisborough’s lead, Roberts smashed a shot against the underside of the bar then at the other end, sub Dan O’Reilly and Kalthoeber were both denied by last ditch blocks in the home defence. 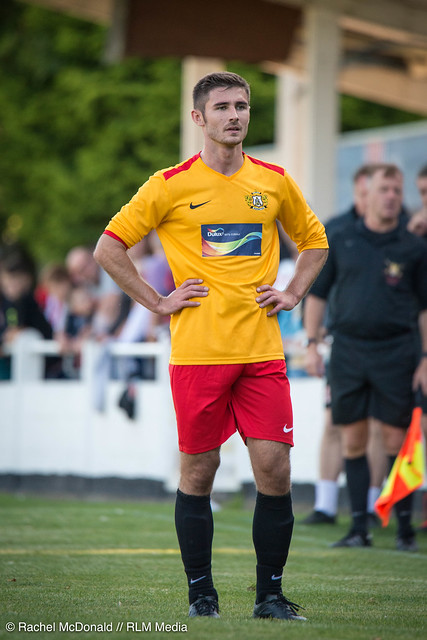