Ashington slipped to a heavy defeat in their opening Ebac Northern League first division match of the new campaign against Hebburn Town - one of the sides hotly tipped for promotion - at the Energy Check Sports ground on Saturday.

The 5-1 score line was a bitter pill to swallow for manager Ian Skinner’s revamped side to take but the contest could so easily have been dubbed the ‘Graeme Armstrong Show’ – with the prolific marksman bagging four of the goals.

The Hornets had opportunities to score more but were denied by Ashington goalkeeper Dan Staples coupled with some near misses before substitute Luke Sullivan got the fifth in the closing stages. No one would argue that Hebburn didn’t deserve their win but for the opening 20 minutes, it was the visitors from Wansbeck who settled well and who won the early exchanges. They scuffed a glorious chance via a penalty before Dan Taggart – one of a plethora making their debut – handed them a deserved lead. Hebburn were gradually growing into the game and in the last half hour of the period, turned things around adding a crucial third in stoppage time with Armstrong - at his lethal best – completing a hat-trick.

At times it was wave after wave of attacks from the home side but it certainly wasn’t all one way traffic as the Colliers fluffed their lines squandering a handful of golden opportunities. Callum Johnston and Taggart produced early snap shots which were held by ‘keeper Andrew Jennison and it was the stopper who denied Damien Stevens from the spot in the tenth minute, diving to his left to palm the ball away to safety after referee John Mulligan had spotted a handling offence.

However within a minute, Ian Herron – on his return to the club - slotted a lovely ball through which pierced the defence and Taggart rounded Jennison before coolly whipping home left footed. On the quarter hour, Armstrong served notice, nodding wide from a Michael Richardson corner on the right but three minutes later, the talisman levelled. Ben Sampson clipped Jack Elliott inside the area, referee Mulligan again had no hesitation in giving the award and although Staples dived the right way, Armstrong’s penalty had too much power on it and nestled neatly inside the post.

The equaliser put a spring into Hebburn’s step and after Ben Dibb-Fuller had been denied, they went ahead with a goal of sheer simplicity, Armstrong sliding home wide of the advancing Staples from a ball played into the danger zone from the right. Worse was to follow for the Colliers. Thomas Kalthoeber appeared to be fouled but no free kick was awarded and when Curtis Coppen made a comment to the referee, the skipper was sent to the sin bin for ten minutes. With half time approaching, Taggart sent Stevens clear but his effort was blocked by Jennison and within a minute, Armstrong notched his hat-trick with a blistering right footed drive from the edge of the box which almost ripped the netting off.

Early in the second half, Dibb-Fuller was foiled by Staples then Elliott and Armstrong fizzed efforts inches wide. However, the fourth duly arrived on the hour with Armstrong’s shot appearing to take a deflection before the ball found the far corner. Ashington continued to create chances with Taggart twice thwarted by Jennison and substitute Kyle Downey having an effort cleared off the line by Robbie Spence. Ex Ashington defender Louis Storey then went close and substitute Olly Martin’s shot was repelled by Staples before Hebburn went nap in the 89th minute with Sullivan losing his marker at the near post to nod in a corner by Lewis Suddick. 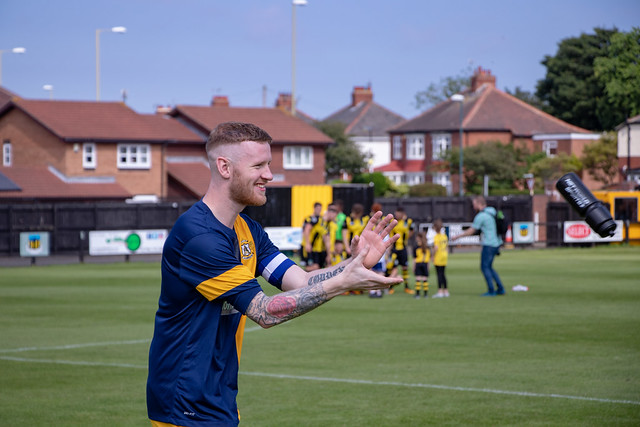